Home > Where to Stay > The history of Villa d’Este, on the Lake Como
0
0
Search
Share the article:

Villa d’Este is located on the shores of Lake Como, in Cernobbio. This elegant residence, originally known as Villa del Garovo, was built as a summer residence for Cardinal Tolomeo Gallio, and then became – starting from 1873 – a luxury hotel.

In this place, near the Garovo stream – in 1442 – the Bishop of Como Gerardo Landriani had a female convent built. In the 16th century, Cardinal Gallio had the convent demolished, entrusting the design and construction of his residence to the architect Pellegrino Baldi. The building was surrounded by gardens of extraordinary beauty, and was finished in 1570. After the death of its founder, the villa gradually fell into ruin, and only in the 18th century was transformed into a place used for spiritual exercises by the Jesuits. Afterwards, it passed to Count Mario Odescalchi first, then to Count Marliani, finally it was bought by the Calderari family of Milan, who restored it entirely and landscaped a splendid Italian garden. Furthermore, a Nymphaeum and a Temple were added to the building, in which the statue of a Hercules throwing Licas into the sea can be seen. 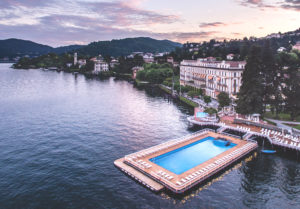 At the death of Bartolomeo Calderara, his widow Vittoria Peluso, dancer of the Teatro alla Scala in Milan, remarried to Count Domenico Pino, in whose honor a small fortress was built inside the park. From 1815 the residence passed to Carolina Amalia of Brunswick, Princess of Wales, wife of King George IV. The building’s change of name dates back to that year, so to become Nuova Villa D’Este, the new owner being actually a descendent of the House of Este. Later, after 1821, the villa was acquired by Prince Giovanni di Torlonia, by the Orsini princes and then by Ippolito Ciani, who turned it into a point of reference for Italian patriotic activities. Later, for two years it belonged to the Russian Tsarina Maria Feodorovna, who brought the building to new splendor and made it famous for its elegant and sophisticated night parties.

After another period of disrepair, thanks to the intervention of the Mayor of Milan Giulio Bellinzaghi, the Villa d’Este Company was created and the residence became a luxury hotel, with the name of Villa d’Este. After the Second World War, Villa d’Este became particularly known for its social life and was the scene, in 1948, of the “Bellentani crime”, which made headlines at the time with the name “The Ermine crime”. The Countess Bellintani, in fact, killed her lover Carlo Sacchi on the premises of the Villa, during a party, then covered the gun she had used with a precious ermine stole.

The elegance of the past

Of the various architectural transformations that have marked the building, you can still see the seventeenth-century Ninfeo, embellished with polychrome mosaics, from which you can access the Viale d’Ercole, the path of stairways and waterways that crosses the gardens up to the statue of Hercules and Lica. The scenic fortification built by Vittoria Peluso can also still be seen, surrounded by the English garden. In recent times the so-called Giardino delle Chef has been added, a veritable botanical garden. 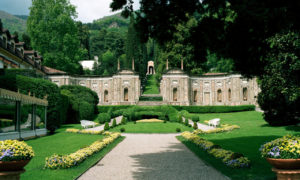 The Villa d’Este hotel stands out for having an outstanding clientele, as well as being a regular destination for international congress tourism, it hosts the Ambrosetti Forum, a meeting place reserved for the most important figures in politics, finance and industry worldwide. Finally, a note of distinction is given to Villa d’Este by the annual “Concorso d’eleganza” reserved for vintage cars.

How to reach Villa d’Este

Villa d’Este can be reached by car from Milan, in about an hour, along the A9, or the State Road 36 of Lake Como and Spluga.