Home > Holidays and Traditions > The Mamuthones: traditions of Sardinia
0
0
Search
Share the article:

One of the Sardinian carnival masks: the Mamuthones

Carnival in Sardinia (Carrasegare) is one of the most evocative and most popular events to take place on the island. Suspended between land and sea, the Sardinian land reflects its duality even in the masks that populate the Sardinian Carnival, existing in the limbo between nightmare and fantasy, between superstition and sacredness. Among these we find the Mamuthones. Italian Traditions will guide you on the discovery of this traditional mask of the Sardinian carnival explaining in detail what it consists of, describing its origin and its meaning. 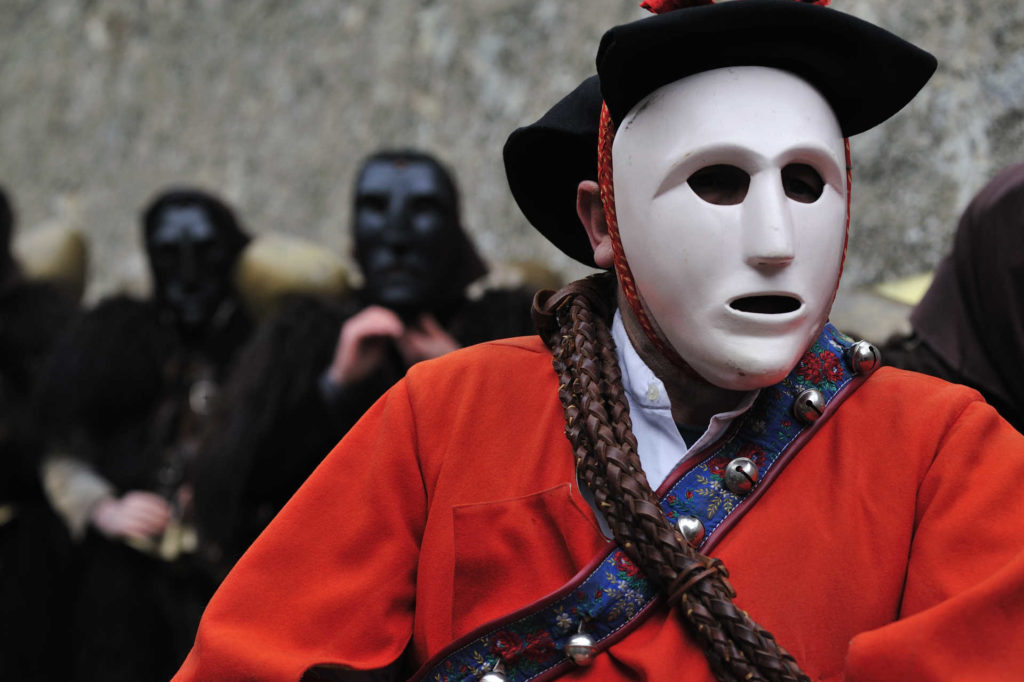 The Mamuthones are a traditional mask of the Sardinian carnival. Their popularity is due to the involvement in a suggestive and ancient ritual practiced in Mamoiada, a small Sardinian city located 15 kilometers away from Nuoro where they parade together with Issohadores. During the folklore event, the Mamuthones perform in all their catalytic force hypnotizing the public by dancing rhythmically in groups of twelve, clashing with the disorderly gait of the Issohadores.  These traditional celebrations attract the curiosity of people from all over the world.

The origins of the mask

The origin of the Mamuthones mask is very old and is thought to date back to the first centuries after Christ. A close reference in time is that found in the writings of the German linguist Max Leopold Wagner. According to oral tradition the Mamuthones paraded already in the ninth century and, whilst some believe that the custom dates back to the Nuragic age, others suppose that their performance celebrate the victory of the shepherds of Barbagia (the issohadores) over the Saracen invaders made prisoners and paraded around town (the Mamuthones). 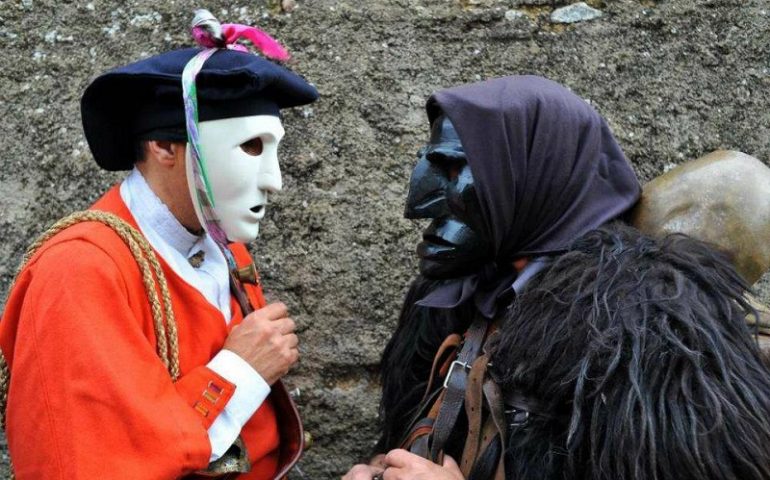 Or it can be read as “a totemic rite of subjugation of the ox”, or a ritual procession made by the nuragics in honor of some agricultural and pastoral occurrence.

The Mamuthones, are therefore, a drove of oxen tamed by the issohadores their herdsmen or, maybe, the Mamuthones as oxen men, shepherds who identify themselves in the ox covering their face with a mask that reproduces its features, as a sign of almost mystical veneration for an animal so useful and precious for man. 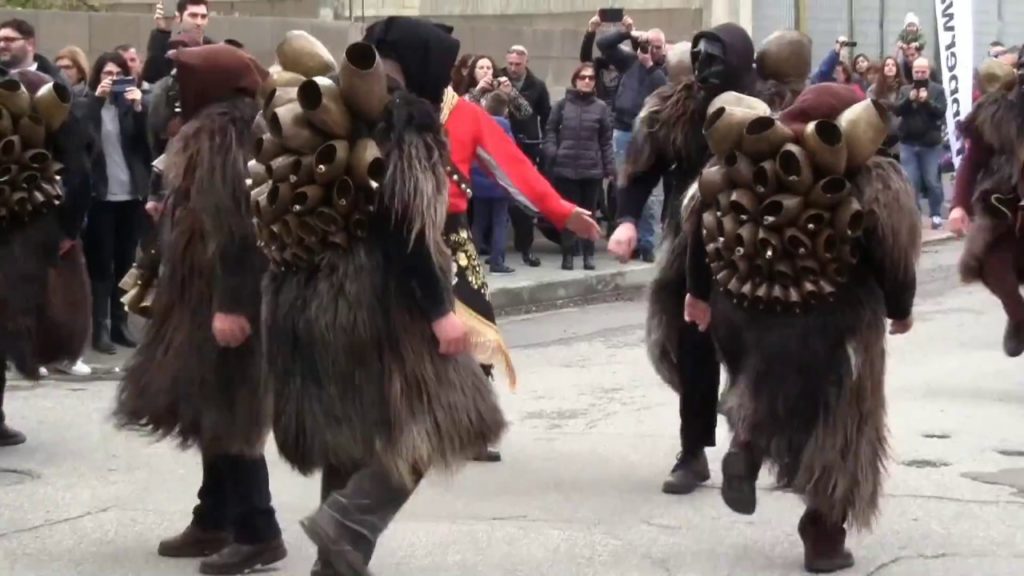 According to Dolores Turchi, a scholar of popular traditions, the Mamuthones originate in even earlier times: they would be related to ancestral fertility rites, due to Dionysian cults widespread throughout the Mediterranean.

Other authoritative interpretations have seen in the masquerade the representation of the mythical practice of the geronticide (the killing of the old), others still see in the mask of the Mamuthone the effigy of some demonic spirit.

An ancient legend tells that a shepherd after having mistakenly chewed stramonium leaves, in the grip of visions, exchanged his companion for a demonic figure. He came round after a few days of delirium, returned to the village and told his fellow villagers about the terrifying person he had met. Maybe from here the traditional carnival mask of the Mamuthones was born.

What does Mamuthones mean?

The origin of the name Mamuthones is uncertain. According to one theory it comes from the Latin name of the town, probably “manubiata” to indicate the presence of a Roman military garrison, justified by the strategic importance of the place, located on the main north-south communication route of the island. The Roman presence is testified by the fountain which is still present in the town.

The masquerade can be traced back to the ancient Celtic cult of the waters (pre-nuragic era) and to the subsequent Bacchus cults, in particular to the scarecrows, scary beings of the popular legend widespread in many towns of the island. 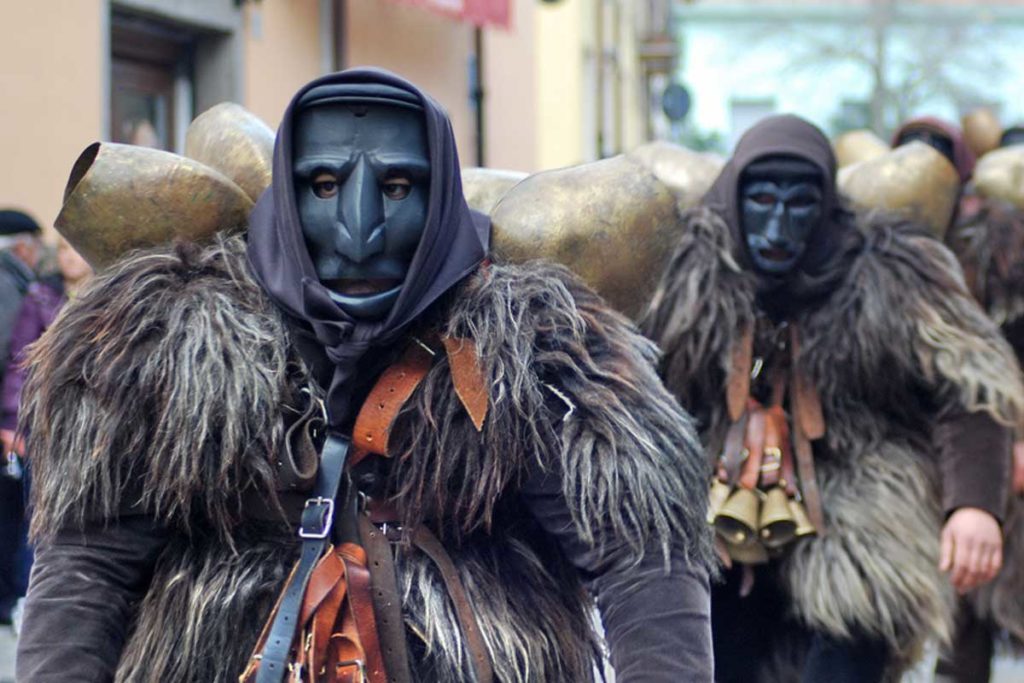 The masks used by the Mamuthones are very simple but at the same time they are particularly effective. One of the peculiarities concerns the black suffering face that has a diabolical look to it. Bells of different sizes are tied to it and are made to ring with rhythmic skipping.

The clothing of Mamuthòne currently include a dark velvet robe, the black mastruca (sheepskin jacket characteristic of Sardinian shepherds) called sas peddes, the hand-tanned leather shoes called sos hòsinzos; worn over the face is the sa visera, an anthropomorphic black mask, on the head the Sardinian cap (coppola) and the handkerchief of the female clothing (su mucadore) that wraps around the capera and cap. A heavy bunch of bells of varying sizes is placed on the back of the Mamuthòne, bound by a series of leather straps with a complex anchoring system, another smaller group of bronze bells is placed on the chest and stomach. The set of bells and rattles is called sa càrriga.

The Italian tradition of carnival is particularly rich in characteristic masks of each region. Each of these has ancient origins and distinctive characteristics that have made them famous all over the world. Even today they are present in the traditional Carnival parades through the Italian cities. If you want to discover other carnival masks of the Italian tradition we recommend reading this article. Now that you know what the Mamuthones are, you just have to go in person to see the Mamoiada carnival parade.