Born in 1973 – from an idea by Carlo Pagnotta – Umbria Jazz is the most important Italian festival dedicated to Jazz music and it is held every year in Perugia.

Initially conceived as a traveling event, Umbria Jazz immediately immediately met with extraordinary success, hosting, among others, artists of the stature of Dizzy Gillespie, Sarah Vaughan, Art Blakey, Charles Mingus, Chet Baker, Cecil Taylor, Archie Shepp and Gil Evans. After an interruption of three years, the event returned in 1982, directed by the homonymous Foundation presided over by Renzo Arbore, based in Perugia with concerts located in Terni, Orvieto, Foligno, Gubbio, Città di Castello and Assisi. With the comeback, other great jazz musicians have joined the stage, such as Keith Jarrett, Michel Petrucciani, Sonny Rollins, Ornette Coleman, Manhattan Transfer, opening also to musicians coming from other musical backgrounds such as rock, blues and soul, and among them Van Morrison, Caetano Veloso, Bobby McFerrin, Carlos Santana, Eric Clapton and BB King. The formula launched on its “new course” is one that still characterizes this event, which has now become a “classic” for the Italian music and concert scene. 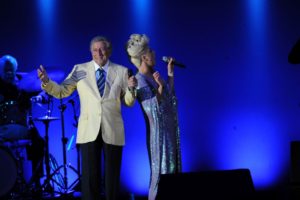 The 2018 edition, scheduled from 13th to 22nd July, is dedicated to Brazilian music. This edition will be inaugurated by a unique event that combines music and entertainment and a birthday party. In fact, Quincy Jones’ 85th birthday will be celebrated, with an “Anniversary Celebration” involving, among others, Dee Dee Bridgewater, Paolo Fresu, Ivan Lins, Take 6, Noa and Patti Austin.

The intense program of the Festival will include the presence of Caetano Veloso, who returns to the stage with Gilberto Gil and his sons, involved in the exciting musical project of “Ofertorio”. But also the presence of Margareth Menezes, a concert by Stefano Bollani, and Os Mutantes, the most eccentric and innovative band of the “tropicalist” scene, in a mix of psychedelic experimentation. And the arrival of David Byrne, Massive Attack, Mario Biondi and Pat Metheny. Throughout the course of the event, there will also be the duo composed by Marcello Goncalves, great virtuoso of the 7-string guitar, and by Anat Cohen, specialist in the “baixolao”, a bass guitar. Among the many guests, we’d like to mention Danilo Rea, Antonello Salis & Simone Zanchini. At the end of Festival Melody Gardot and finally Gregory Porter, who will present his tribute to Nat King Cole.

Umbria Jazz will take place at the Santa Giuliana Arena, the Pavone Theater, the Santa Cecilia Oratory, Piazza IV Novembre, the Carducci Gardens and the Morlacchi Theater. A series of meetings and initiatives – always linked to music – and a food and wine festival run by the open-air restaurant set up in the Arena are added to the strictly musical program. All this will transform Perugia, as usual, into the Italian capital of global music.