The Trulli are a reflection of a thousand-year-old culture, but their presence on the territory of Puglia dates back to the fourteenth century.

These are white conical houses built with dry stone. They are particularly present on the Murgia plateau and in the Valle d’Itria. The latter is particularly rich in Trulli, so much so that it is also called “Valley of Trulli”. The municipalities with the highest presence of Trulli are Locorotondo, Cisternino and Martina Franca and Ceglie Messapica, together with the so-called “Trullo Capital “: Alberobello. 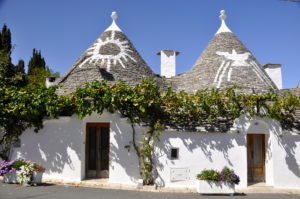 In fact in 1996 the Trulli became a World Heritage Site in Alberobello, and there is also a Museum – inside the “Trullo Sovrano”, the largest in the country – dedicated specifically to this extraordinary type of housing construction. But the Trulli are also present in many other neighboring towns, including Fasano, Cisternino, Noci, Putignano, Villa Castelli. Overall, their presence extends over a territory that includes parts of the provinces of Brindisi, Bari and Taranto.

The history of the Trulli

The Trullo has an ancient history. Its form, in fact, is linked to the prehistoric tholos, a round building present in different areas of Italy and the Mediterranean. In particular, researchers have found great homologies with Mycenaean tombs in this form, dating back to 1500 BC. The oldest are those visible in Alberobello, which date back to the fourteenth century AD. Probably, however, the first Trulli were built in that area around the year one thousand, progressively creating small settlements or small villages. 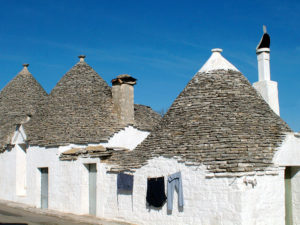 However, it was only after 1870 that the Trulli became the object of study and research, and the theory of their native origin was flanked by one that would have them derived from the culture of the Near East. However, their architecture and their construction are closely linked to the characteristics of the land of Puglia, rich in the stone with which they were built. Originally, these constructions would have been temporary shelters for shepherds, farm implements and animals, and then evolved towards the shape of the house itself.

The architectural secrets of the Trulli

Usually, the Trulli are presented not only in single form but, more often, in the form of agglomerations of several modules. The basic module of the trullo is presented with a circular plan, made with dry masonry of great width and total absence of openings, except for a window able to guarantee the exchange of air. Basically, it is an elaboration of a hut, made with the exclusive use of stone and without the use of mortars and binders. These constructive characteristics make the Trullo an extraordinary example of “low impact-building”, ante litteram. The thickness of the walls, together with the small number of openings, guarantees to the Trullo a high “thermal inertia”, and therefore an excellent preservation of the internal heat during the winter, and of cool temperatures during the summer.

A characteristic aspect of the trulli, is represented by their conical dome, which has a round stone on the top and symbols and esoteric or superstitious signs traced with white lime on the outer walls. Material with which they are periodically whitened.

A particular feature emerges, in the case of the so-called “Siamese trulli”, present in Alberobello. These are double Trulli, with two entrances, which overlook two different streets, which enclose several rooms in total absence of windows.