In many towns in Sardinia, Holy Week is one of the most intense moments of the year, pervaded by the mystical-religious traditions that characterize the period of Lent.

Every single village, from the coast to the barren villages of the hinterland, celebrates rites and ceremonies that are rooted in the time of Spanish and Catalan domination on the island, whose echo spreads along the streets where you can hear the suggestive ancestral prayers and litanies.

The traditional Easter celebration, also called “Sa Pasca Manna” recalls an atmosphere particularly felt in Sardinia, by believers and not, thanks to its corolla of experiences that invoke the inescapable empyrean and its blessed.

The Passion of Christ lives again and relives in the penitences and fasts still practiced in Sardinia and reaches its peak on Good Friday, in the most fascinating and captivating evening, when the Crucifix, surmounted by a white canopy, parades through the streets of the villages and of the little towns followed by his mother, dressed in mourning who, weeps for his earthly disappearance.

The Holy Week opens with the celebration of Palm Sunday, an experience carefully planned during the previous weeks by the Friars Cappuccini and the Prioress de Sa Prama. 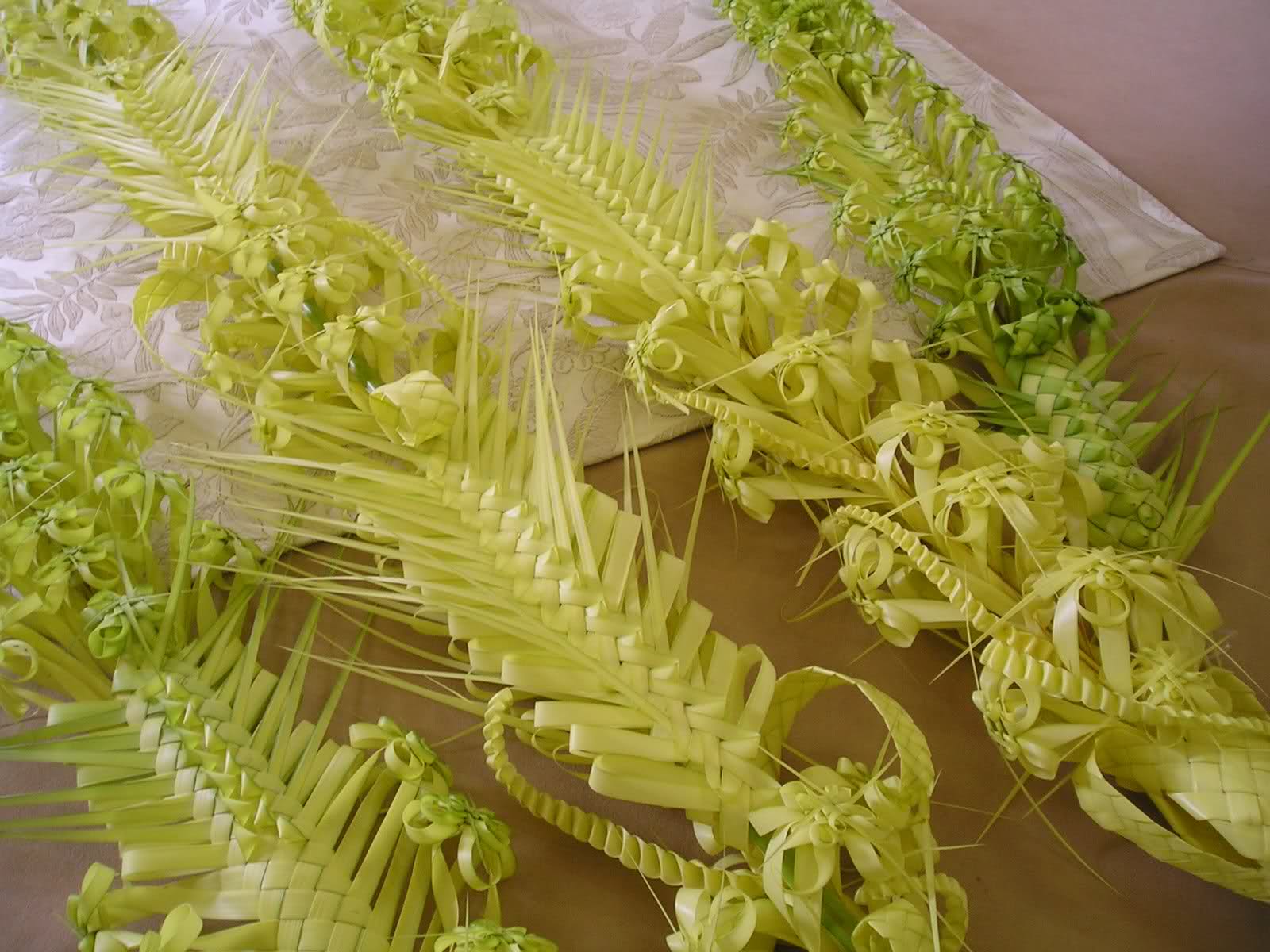 In some towns such as Laconi, men and women of the town are dedicated to the ritual of Sa Pintadura de Sa Prama, or the decoration of the palms whose leaves are kept by young and old people to be shaped in the form of evocative plaits and allegorical decorations

such as Sa Cocciula which can be enriched by is Pitzicorros and Su Pàssiu, which remains in the possession of the priest and is embellished by Su Siddu or the Seal, Sa Ruxi, or the Cross “, Su Calixi or the Chalice, Su Sole and Sa Nuxi, the walnut

The nenneres or wheat sprouts, on the other hand, decorate the sepulcher that will house the body of Christ during the Holy Thursday ritual. In this case the grain nuance appears almost diaphanous as the seed is made to sprout, about 30/40 days before, usually under the bed of a symbolic sepulcher in the darkness.

On Holy Tuesday the procession of the Mysteries takes place with the seven simulacra reminiscent of the Passion of Jesus Christ, carried on shoulder by is Baballottis (from the Sardinian Campidanese baballotti, “little animals”), that is people wearing a white robe and their head covered by a hood that recall the figure of the executioner, but in reality symbolize the souls in pain for the murder of Christ. 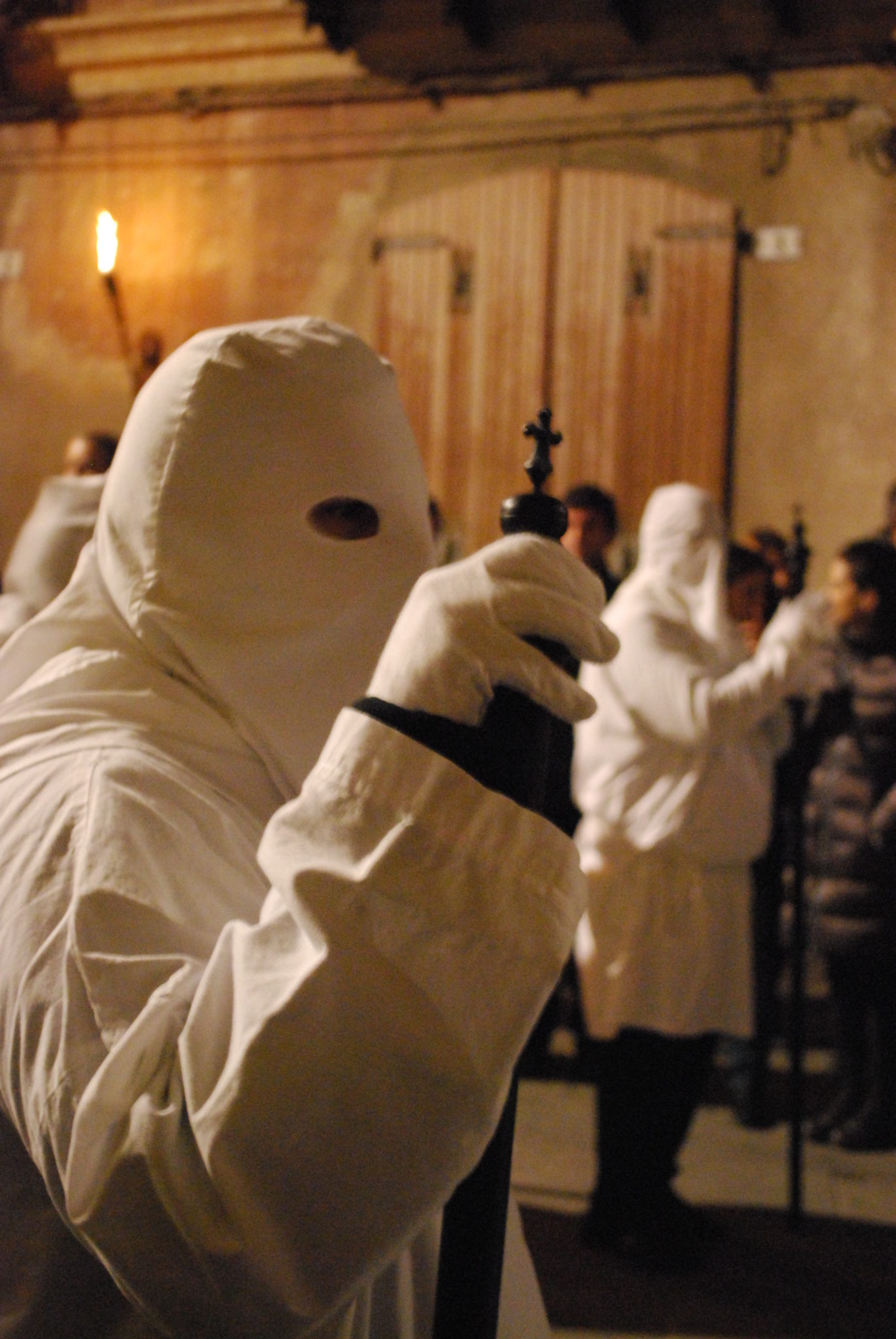 At the twilight of Holy Thursday, the areas of Sulcis Iglesiente are filled with Baballottis, who accompany the statue of Our Lady of Sorrows in search of the wandering son in the churches of the city and move to the sound of drums and matraccas, ancient instruments consisting of cogwheels on a wooden support that, made to rotate, create noise.

The procession of Mysteries, s’Iscravamentu

Among the most emblematic and fascinating events, stands the Procession of  Mysteries, a liturgy that recalls the “day of indignation” of Christ towards the markets that, as the Gospel recounts, were banished for having turned the temple into a market place.

Another ritual that exudes faith and belief is s’Iscravamentu, that is the rite of removing Jesus from the cross that follows the procession in memory of the Calvary that characterizes Holy Saturday. In fact, etymologically, the term Scravamentu or Iscravamentu derives from the modern Sardinian term cravai or “infilare” which, before the negative prefix “s” means “to remove”.

In the testimony of the evangelists, Jesus died on the cross at three o’clock on a Friday afternoon.
Shortly thereafter his heart was pierced with a lance and he was removed from the cross. As sunset was looming and with it the obligation of the absolute sabbatical rest imposed on the Jews by the Mosaic law. The body from the Crucifix was then cleaned at best, wrapped in a sheet and hastily enclosed in a tomb dug near the place of torture.

Holy Saturday, in historical reality, was a day of silence and waiting. Waiting for the resurrection, which took place in the early hours of Easter Sunday.

The same events revive Holy Week and the body in Simulacro is cleaned and deposed from the cross by the faithful and then laid on a litter embroidered and basted by veils and lace and then carried on the shoulders of the men in procession and weeping during the Easter Vigil .

During the Saturday night, at the singing of Gloria, the Ressurected Christ enters the cathedrals, while on the morning of Easter Sunday, the statue of the Madonna meets that of her Resurrected Son in the main square of the city surrounded by the clamor and the emotion of the crowd for the moment of S’Incontru (the meeting). The two statues simulate a triple bow and then head towards the main church of each town where Mass is celebrated and the celebrations for the Resurrection are opened. 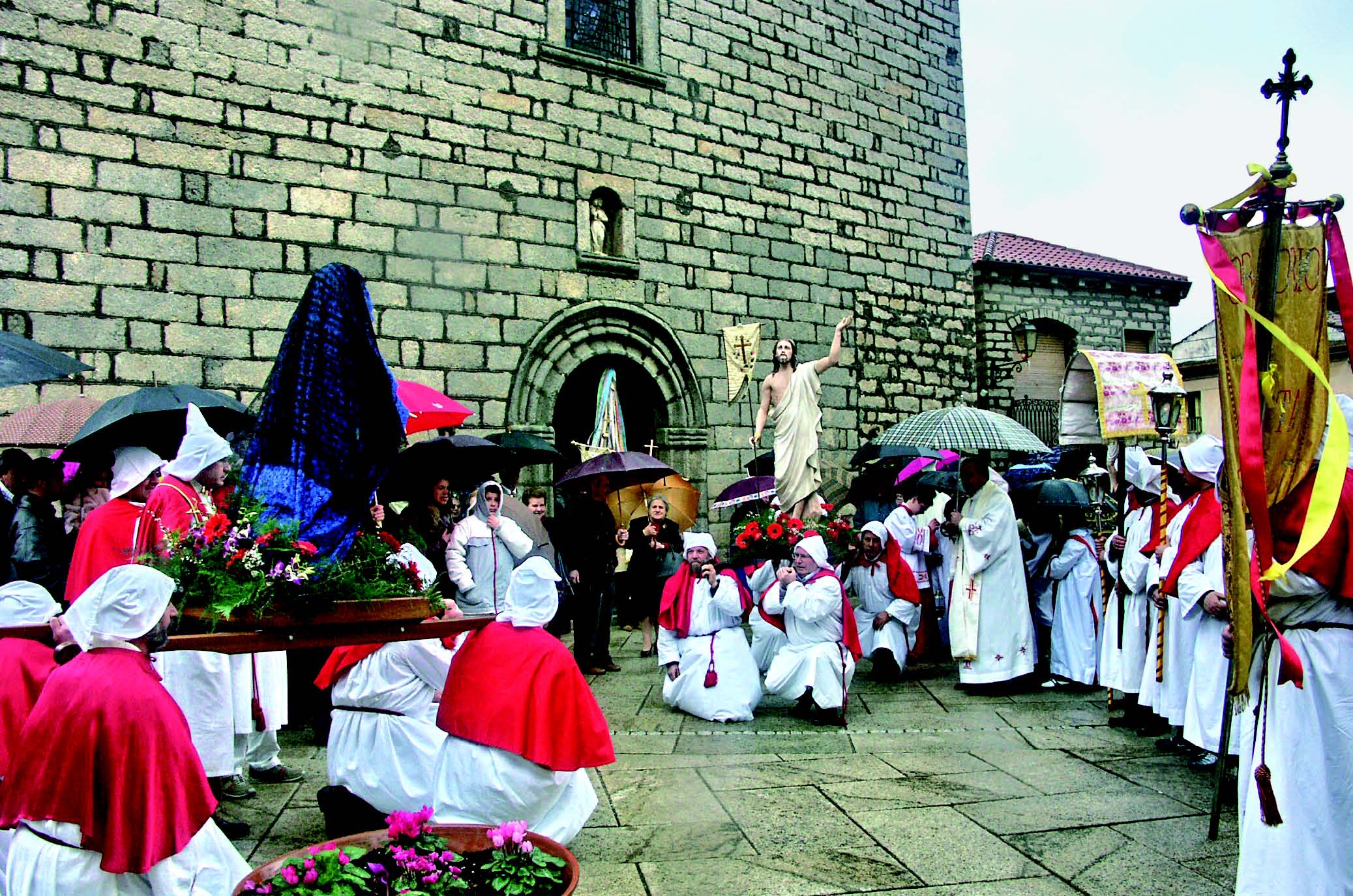 The rituals end on the evening of Tuesday after Easter, with the procession of S’Inserru, maximum culmination of a mystical and sacred period like the land in which it is relived.