Monte Cerignone is a small village in Montefeltro, dominated by a XIII century fortress, in the province of Pesaro and Urbino. A small masterpiece of medieval architecture, whose charm has remained unchanged over the centuries. And here, in July, the Medieval Days are held with the historical re-enactment, the procession and the Palio dell’Uovo of Mons Cerigonis. One of the most picturesque summer events in Italy.

All the charm of the Middle Ages

With only 700 inhabitants, Monte Cerignone stands clinging to a rock spur, between the castle and the river below. The village includes a beautiful Town Hall, the church of Santa Caterina, erected by the Knights of the Order of Malta, the church of Santa Maria del Soccorso and the church of San Biagio. La Rocca, built by the Counts of Montefeltro, is undoubtedly the most fascinating and evocative place in the country, and can be reached along enchanting roads where time seems to have stopped. 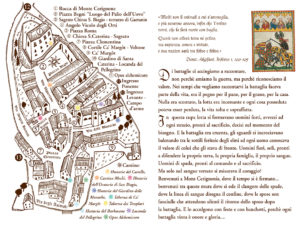 The Medieval Days are celebrated in Monte Cerigone from 11th to 13th July, and represent one of the most evocative folkloric events of Italian tradition. The town comes alive thanks to the historical re-enactment, which ends in the characteristic Palio dell’Uovo, turning back the clock to the thirteenth century. Jesters, preachers and acrobats animate the ancient streets. At nightfall, torches and braziers are lit, and falconers let their hawks fly, while stalls are set up that offer artisan products and culinary delicacies. All enriched by large lunches and dinners hosted in the cellars of the ancient village. The procession starts from the Castle – with famous guests and the flag-wavers from the City of Cortona and Corte – that parades through the streets of the village, reaching Piazza Begni, where the Contrade games are held and from which the Palio is assigned.

The Palio of the egg

This palio, called of the Egg, is also one of the most controversial and strange Palios in the world. It consists in a game of very ancient origins, which involves the Contrade di Monte Cerignone in a series of trials of increasing difficulty, the last of which consists in centering a human target (a representative of the Contrada which placed itself last in the previous year’s edition). The human target, who runs inside a “corridor” created with two parallel fences, is hit with rotten eggs, which have replaced the wild chestnuts used in the past. One curiosity are the tools with which you can launch the eggs: the “bisacce”, or slingshots made with leather straps. The launchers forcefully rotate the “bisacce”, letting go off the end held in the hand, thus throwing the projectile and trying to hit the target, who can move however he wants to try and dodge the eggs, as long as he doesn’t bend down below the fence.

How to reach Monte Cerignone

Coming from North or South via the “A14” motorway we advise you to take the exit at Rimini Sud.