Every nation has its own national anthem. After the Second World War Italy became a Republic and the Canto degli Italiani was chosen on October 12, 1946, as a provisional national anthem. Italian Traditions will lead you on the discovery of this song that represents the nation also internationally. Here we will tell you its history and its meaning. We will also present the author of the text and references to the history of our nation that are present within the composition.

The origin of national anthems

These songs originated in the second half of the 1700s with the establishment of national states. In this context the national anthem becomes a symbol of the unity of a people united under one flag. Its purpose is to explain through music the cultural and sentimental peculiarities of a specific community of citizens. The first modern national anthem was the French one entitled La Marseillaise which was introduced after the revolution.

The history of Fratelli d’Italia

The real title of the song is “Il Canto degli italiani” and was written by the Italian patriot Goffredo Mameli in 1847, with music composed by Michele Novaro. Its popularity was immediate, but after the unification of Italy in 1861, La marcia Reale was chosen as an anthem, an official piece of the Savoia royal family. Later, at the end of the Second World War, the Italian Republic was born and Fratelli d’Italia was chosen on 12 July 1846 as a provisional anthem. In 2017 it obtained the status of national anthem by law.

On the precise date concerning the drafting of the text there are two different versions. The first one is believed to have been written on September 10th, 1847, while the second one places it on September 8th of the same year. What is known for sure is that the author immediately discarded the idea of ​​adapting it to existing music, and in November 1847 he decided to entrust the composition to Michele Novaro, a Genoese composer residing in Turin. Its debut took place in Genoa during the commemorations for the revolt of the Portoria district against the Habsburg invaders. 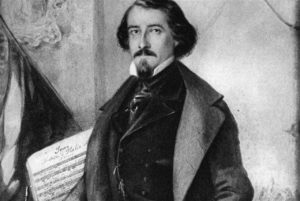 In short, Goffredo Mameli was a Republican Jacobin and a great supporter of the French revolution. In fact, the text was inspired by the Marseilles, the French national anthem. When he created this song he was a young student and a great patriot. The historical context in which he lived was characterized by widespread patriotism that will then lead to the revolutionary uprisings of 1848. He died at only twenty-one years of age in Rome in 1849 due to an infected wound that occurred to him during the siege of Rome at the time of the second Roman republic.

The meaning of the text

One of the peculiarities of the text of Fratelli d’Italia is the archaic language used and the presence of numerous historical references. In the first stanza there is a reference to Publius Cornelius Scipio General and Roman politician who defeated the Carthaginians and Hannibal in the battle of 202 B. C. Here there is a metaphorical call to the heroic and valiant deeds of the ancient Romans. This has the intent to urge revolt and the war for independence from Austria. In the other stanzas there are numerous references to historical battles. One of these is that of Legnano of 1176.

First of all, it is worth noting how the Italian national anthem expresses the thoughts of the period in which it was written, that is the one characterized by revolutionary movements. If you want to discover new interesting information about our country we suggest you read this article too . Now that you know the history and the text of Fratelli d’Italia, you just have to listen to it.