Home > History and Legends > The sword in the rock of San Galgano
0
0
Search
Share the article:

Italy is a territory rich in mysterious and enchanting places that have kept their ancient charm unchanged even by stories and legendary tales. One of these is the sword of the rock of San Galgano which is located in Chiusdino in the province of Siena. Italian Traditions will tell you more about this incredible story that seemed to have inspired The sword in the rock of King Arthur. We will also explain where it is and how to reach and visit this fascinating place on the Tuscan hills.

The history of the sword in the rock

The sword embedded in the rock is located inside the hermitage of Monte Siepi. Its story is linked to the life of the saint Galgano. His real name was Galgano Guidotti born in 1148 in Chiusdino and died December 3, 1181. Son of a family of small local nobility he spent his teenage years as a knight. He was inclined to entertainment and debauchery until one day during a trip two visions of the archangel Michael appeared to him. On the first occasion he just presented himself while on the second he invited him to follow him.

Galgano and the archangel Michael reach Monte Siepi where there is a round building and the twelve apostles. When they opened the sacred book, the Creator appeared and converted him definitively. After this experience he resumed his normal life until one day, during a walk his horse led him back there. He understood that it was a sacred place and deserved a symbol that would celebrate his identity, or a cross. He decided to stick his sword into the rock. In this way, the viewer could admire a practically perfect cross.

From this moment his life as a hermit began and from that day he lived in the woods only eating the wild herbs that he collected. One day he made a pilgrimage to Rome and three thieves tried to steal the sword. These, however, fail to remove it but in their attempt they break it. History tells us that divine punishment came down upon them. The first in fact was instantly struck by lightning, the second drowned while the third was attacked by a wolf who tore off his hands but didn’t kill him because the man at the last moment repented and invoked the forgiveness of Galgano.

On his return the saint, realizes the disaster and is desperate for having left the place. At this point he hears a divine voice that tells him to join together the pieces of the sword that, at this point, is miraculously reassembled. From that day Galgano remains guarding the sword until the end of his days. In fact he died here in prayer. Pope Lucio III sanctified him four years after his death. 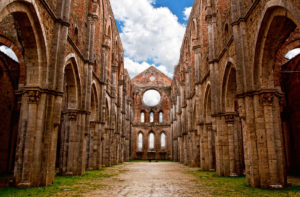 The hermitage and the basilica

The sword in the rock of San Galgano is located in a hermitage on top of a small hill. It is a church with a circular plan that houses the famous sword. This place was built after Galgano’s death. Here every year on the 21st of June during the summer solstice there is a particular and very suggestive event. In fact, the light enters the hermitage and illuminates the wall with a circle that slowly moves up to the sword and the sepulcher.

Here is another thing, at the foot of the hill is the Abbey of San Galgano. This is an imposing structure built in Gothic style in 1218. One of the particular aspects is the absence of the roof and also undoubtedly the isolated place in which it is located.

Where it is and how to get there

Chiusdino is a small medieval village located on the Metallifere hills about forty kilometers away from Siena. The village still preserves two sections of the medieval walls today. To reach these places you can get to Siena by train and from here continue by taxi or bus. Alternatively, it is possible to reach the town by car along the A1 motorway from the Valdichiana exit. From here on the state road you arrive at your destination. The nearest airports are those of Pisa and Florence.

Our country hides mysterious places and fascinating stories to discover. One of these fascinating places is Chiusdino and its legend. If you want to discover other interesting stories we recommend reading this article too. Now that you know the story of the sword in the rock of San Galgano you just have to visit this Tuscan village.