Home > History and Legends > Domus de Janas: the house of the fairies in Sardinia
0
0
Search
Share the article:

Italy has been inhabited since ancient times and the testimonies of past civilizations are still visible today. One of the most interesting are the domus de Janas that are scattered throughout Sardinia. These are stone caves carved into the rock and with a very particular appearance. Italian Traditions leads you on a discovery of these incredible structures and explains what their function consisted of in the past. We also show you how they were used and how they were made. Finally we present the most important that can still be visited today.

These buildings are funeral caves carved into the rock. In ancient times they were used by the populations who inhabited Sardinia to bury the dead. These are placed next to each other in order to create a necropolis that could accommodate up to a hundred bodies. These were positioned in a fetal position next to their belongings that were believed to be useful in the afterlife. The particular characteristic of these Domus consists in the fact that they are real miniatures of the houses where the ancient Sardinian civilization lived.

But that’s not all, according to an ancient Sardinian legend, these dwellings were once inhabited by the Janas, small women who, according to the various local versions, are fairies or witches. They are the protagonists of many folk tales that are part of the island’s cultural tradition. They dwell precisely in these buildings carved into the rock and come out during the night. Some stories say that on nights with a full moon they come down to the village to gather yeast. On this occasion it is said that they enter the houses and approaching the babies cradles they determine the destiny of the newborn. 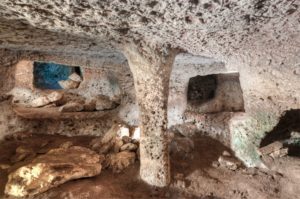 The origins of the domus

The cult of the dead was considered of fundamental importance by primitive cultures and in Sardinia it was no different. This is also evidenced by the findings that took place near Nuoro where the existence of a different civilization was discovered and lived in these territories around 3500 A. C. The Domus Janas found in these areas were attributed to them.

How they are made

The Domus de Janas are real miniature houses that have been carved into the rock by primitive populations belonging to the pre-Nuragic civilization that inhabited Sardinia. They were used for over 1500 years. There are different types of tombs. The simplest ones have only one cell, while the more complex ones involve the presence of cells arranged concentrically with respect to another cell. Some have decorations on the walls such as engravings of magic symbols.

In Sardinia there are over 1000 necropolis scattered throughout the territory. One of the most important is that of the archaeological site of Anghelu Ruju near Alghero. Here 36 tombs have been found characterized by the presence of a bas-relief with stylized bull heads. Also very interesting is that of Sant’Andrea Piru near Bonorva. On this site the tomb of the head of the tribe has been identified. It is one of the most important with the presence of eighteen different rooms.

There are many popular legends belonging to the culture of our country that are inspired by buildings of ancient civilizations. An example are these tombs that according to traditional stories were inhabited by small fairies. If you want to discover new stories and legends we recommend reading this article too. Now that you know what the Domus de Janas are, you just have to go and visit them.