Sandro Filepepi, also known as Botticelli, was born in 1445 in Florence. He was one of the most important Italian painters, famous during the Florentine Renaissance period and, more generally, of the Italian Renaissance. You will surely be wondering where the name “Botticelli” comes from. It is said to have been a name given to the brother and extended to all the male children of the family. The artist was an apprentice with Filippo Lippi and began by producing his works which included several Madonna, one of the favorite subjects of the painter.

Wait … there is more: Botticelli opened his own shop at the age of 26 and was definitely considered a very promising early talent; later he followed the principles of the Neoplatonic Academy, founded by the famous Cosimo de ‘Medici. This stage of his life will be crucial for Renaissance philosophy, which will rediscover the classical authors and put the man back at the center of the whole universe. Some of the most famous works of the painter are: Spring (1482) and Birth of Venus, both works are exhibited at the Uffizi Gallery in Florence.

Some curiosities about Botticelli

I will reveal a secret: in fact the famous and renowned Venus of Botticelli is not an example of ideal beauty. The bust is too long, the navel too high and it has neither shoulder blades nor a sternum, so in reality it probably would not be considered a “beautiful” woman according to the most common aesthetic canons. The artist is however famous for his constant search for perfect beauty and harmony. His works are characterized by the fact that subjects actually resemble more mythical figures rather than common representations of the real world.

This will please you: the famous Italian painter was sent to Rome by Lorenzo the Magnificent as the “bearer” of Florentine art and was commissioned, together with other artists, to paint the walls of the Sistine Chapel with ten scenes depicting both the history of Christ and that of Moses. Botticelli himself created three frescoes, but they are often not mentioned among the painter’s works. 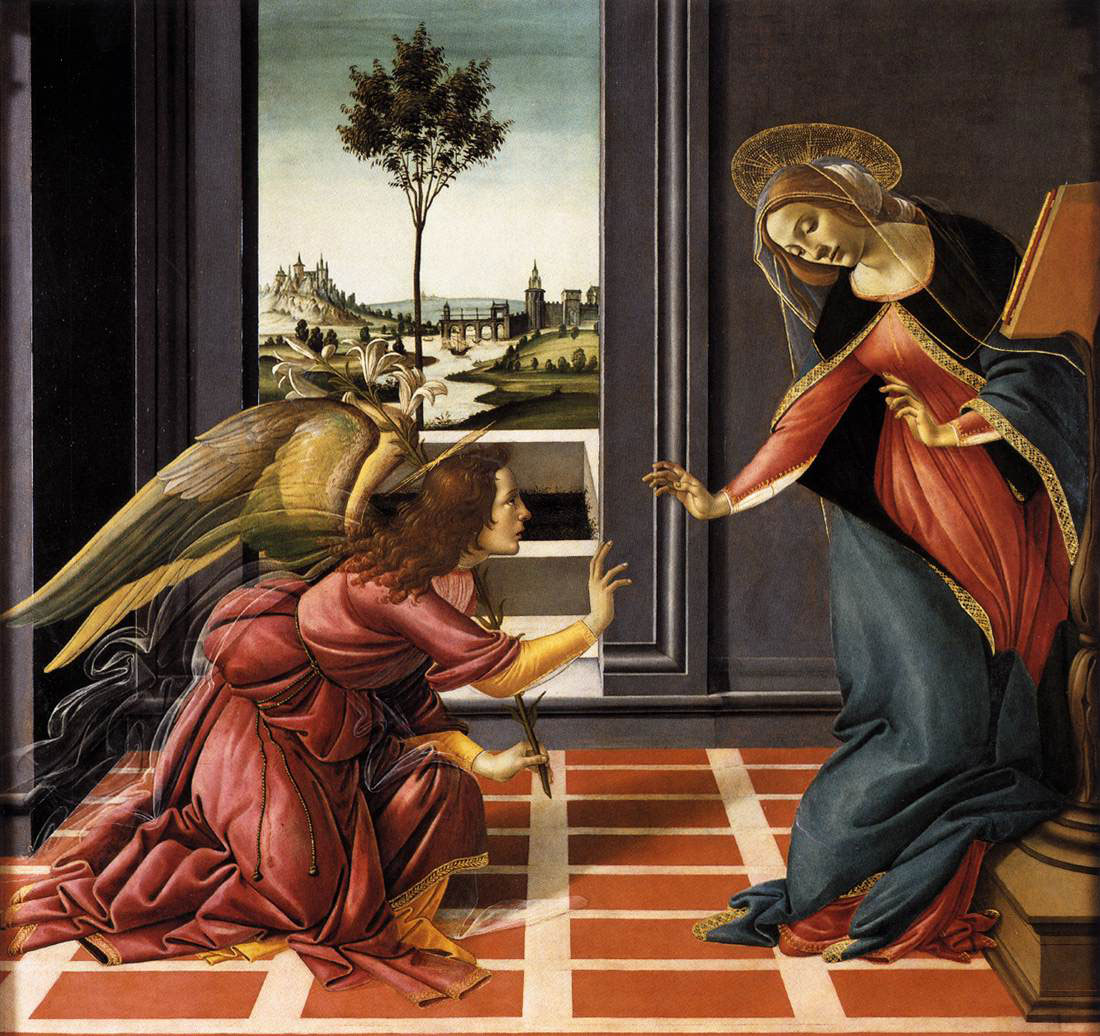 Here is another thing: in fact, although he made a big contribution to Italian art, Botticelli had several difficulties in the last years of his life. His works lost value and were overtaken by those of Michelangelo and Leonardo. In the end he died in 1510, poor and alone and all his masterpieces were put aside for over three hundred years until the nineteenth century when they were re-evaluated. Now let’s discover one of the paintings of the famous Italian painter!

The Madonna della Melagrana is a work done in 1487 and it can be found at the Galleria degli Uffizi in Florence. It was commissioned by the Florentine judiciary to decorate the Audience Halls inside Palazzo Vecchio. Analyzing the painting, first of all, there are several protagonists: the Madonna in the center with the Child and six angels, divided into groups of three, who surround the protagonists.

As for the angels,  you can see, they are in the outermost positions and are leaning on two garlands of white and red roses. The first in particular along with the white lilies symbolize the virginity of Our Lady, while the red roses refer to the Blood Spilled by Christ during his Passion. The face of the Virgin is oval, but slightly elongated and the more experienced will notice that it is similar to the Madonna del Libro, another picture of the important Renaissance Italian painter.

Instead, the pomegranate, held in the hands of both the Virgin Mary and the Child  Jesus, represents fertility and wealth: the red grains instead allude to the future sacrifice of Christ for the salvation of every man. In addition, the pomegranate grains all close to each other relate to the very strong unity of the Church. As you can understand then this is a very great work, created by a phenomenal artist all made in Italy, a true Italian excellence.