Home > History and Legends > The Veiled Lady and all the other ghosts of Castello Sforzesco: discover Milan!
0
0
Search
Share the article:

That of the Veiled Lady is just one of the endless Italian legends that tells of ghosts trapped in villas, parks and castles. Disturbing as well as fascinating, the story is about a woman with a gothic look, entirely dressed in black. It is said that she would bewitch and seduce her victims, who would then end up giving in to her flattery and spending long nights of love with her before the lady revealed to them her real “ghostly” appearance. The legend, which obviously has no real truth, has led the authorities to inspect Parco Sempione from top to bottom in an attempt to find the villa of the woman that seems to be hidden in a secret area of ​​the park. Research though, has never led to any results. 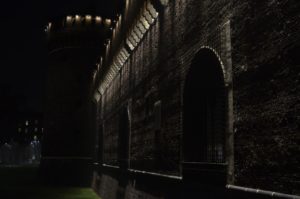 Parco Sempione, a famous Milanese park, located in the historic centre and frequented every day by both the Milanese themselves and by tourists from every corner of the world, is home to an extraordinary but disturbing legend, that of the Veiled Lady. The Veiled Lady, along with other ghostly figures that are meant to populate the corridors of the nearby Castello Sforzesco, seems to be a bewitching nineteenth-century woman, able to ensnare men with her seductive qualities without ever showing her face, to the point of driving them mad. Where does this ltalian legend come from? Let’s find out together.

The legend of the Veiled Dame has its roots back in the 1800s. Although it is pure fantasy, the testimonies (probably resulting from strong suggestion, created by the rumor around the various tales) led the authorities to inspect Parco Sempione, despite the obvious absurdity of the story. According to the reports filed by the alleged victims of the woman, she was meant to inhabit a charming villa in a hidden area of ​​the Park where the lady dragged her victims to spend passionate nights with them. 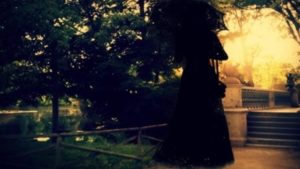 How does the ghost of the Veiled Lady behave?

The ghost of the Veiled Lady, from what is said, is meant to have treated her victims in the following way: in the middle of the night, during particularly foggy weather, dressed entirely in black with a beautiful nineteenth-century dress and her face covered with a veil, she would appear to passers-by and attract them to her with her bewitching ways. Once approached, the men would then be hypnotized, taken by the hand and dragged into the alleged villa of which we have just spoken.

There they would spend several hours in the company of the woman singing for her and dancing. After that, the Veiled Lady would pay homage to them by uncovering her body and spending endless nights of love with them. After the splendid night, she would decide to show her face: it was a shame that under the veil instead of hiding the features of a young woman she would shock the victims by showing only a skull with no eyes. Despite the fright, all her victims would find themselves fleeing but then, later, returning to the park to frantically look for her, hoping to see her again, and in the end they would become crazy.

The other ghosts of Parco Sempione and Castello Sforzesco

Parco Sempione, however, is not only the “site” of the legend of the Veiled Lady. Here, according to the stories, the souls of other ghosts also wander. All women, and all belonging to high society. Wandering souls in search of peace and redemption, that they could not obtain in life. Many of them would also wander among the corridors of Castello Sforzesco, a famous Milanese palace-museum. Among these, the most famous are Beatrice d’Este, wife of Lodovico il Moro, and Isabella d’Aragona, her bitter enemy who would wander the castle in search of a poison to “kill” her antagonist.