Home > Culture Events > The Palio of the ten Municipalities in Montagnana
0
0
Search
Share the article:

Montagnana, a small town in the Province of Padua which has been awarded the “Orange Flag” for its historical beauties and its typical products, is included in the list of the “most beautiful villages in Italy”.

The Palio of the 10 Municipalities

The Palio of 10 Municipalities is held in Montagnana on Sunday, September 2nd . The folklore event, which starts on August 25th with the Oath of the Captains and the parade of the flag-wavers of the Palio, takes place every year in the historic center and inside the walls of the small town in the province of Padua, celebrating the challenge between the ten municipalities in the area.

The race follows the path of the valley under the walls of Montagnana, and the participating Municipalities compete for the Pallium, a scarlet cloth decorated with the work of art of a contemporary Master artist. Among the artists who have contributed we must remember masters such as Annigoni, Murer, Sassu, Santomaso and Zancanaro. 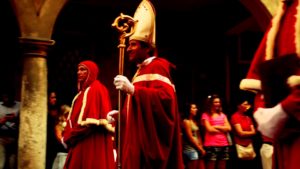 The History of the Palio

The Palio consists in a horse race, involving ten jockeys, in a competition which requires skill, strength and intelligence. Originally, this competition took place in the same way in Padua, in Ferrara and in Verona, in remembrance of the liberation from the tyranny of Ezzelino III Da Romano, who administered the Marca Trevigiana in the name of Emperor Frederick II of Swabia. After the Second World War, the Palio came back into vogue after dark and controversial periods. In 1952, in fact, a committee of citizens brought back the Palio that took place between the districts of Montagnana, and another was reserved for some municipalities in the surrounding areas. Everything fell into oblivion due to the onset of violent animosity between the Contrade, and only in 1977 a Palio was finally celebrated involving the municipalities that had already been part of the competition since the thirteenth century. So, from that day, every year the Palio is being held. In 1981, the event was moved from August to September, as still happens today. The course of the race has also changed over time, and has now become the circuit of the city walls. 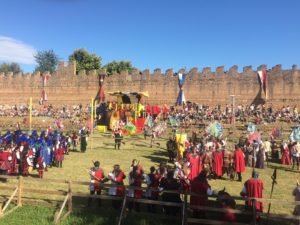 The Municipalities that take part in the Race are Casale di Scodosia, Castelbado, Masi, Megliadino San Fidenzio, Megliadino San Vitale, Merlara, Montagnana, Saletto, Santa Margherita d’Adige and Urbana. The municipality that has collected more victories to date is that of Montagnana, with 9 successes, followed by – joint winners Casale di Scodosia and Castelbaldo with 7.