For Italy April 25th, Liberation day, is one of the most important dates for the history of the nation. It recalls and symbolizes, in fact, the liberation from the Nazi domination and from the fascist dictatorship. A goal achieved also thanks to the sacrifice of many Italian partisans. As was Italo Calvino, one of the most famous Italian writers.

One of the most important Italian writers

Italo Calvino is, among contemporary Italian characters, the Italian writer who has mostly experienced a civil vocation – with direct participation in the Liberation struggle – and a literary vocation. The author of unforgettable novels such as Il Barone rampante, Se una notte d’inverno un viaggiatore e Le città invisibili – just to name some of the titles that make up his extensive work – he signed a novel that is also a reference point for literature and for that specific historical period of our country.

Italo Calvino set the novel Il sentiero dei nidi di ragno in Liguria, in a small town on the Riviera di Ponente, during the Resistance period. As a protagonist the author built the character of Pin, a boy abandoned to himself, whose sister makes a living as a prostitute, even with invading Germans. A relationship that gives Pin not a few problems, but above all that of being despised and rejected by everyone.

It is for this reason that he will decide to steal a gun and, with this, to get the consideration of the adults who despise him. The theft of the gun, however, will give him further problems instead of solving them, and for this he will be imprisoned by the Germans. Escaped from detention, he will come into contact with a group of hidden partisans in the mountain and inland areas of Liguria. Here, in hiding, he will share the daily life of the partisans, the hardships and the difficulties of hiding and fighting. But he will also find a friend, Cousin, who will become for him a sort of adoptive father. 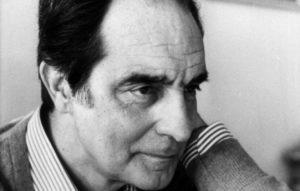 Italian writers: the story of Calvino

Born in Cuba, Italo Calvino can be considered in all respects one of the great writers of the second half of the 20th century. In his long artistic and literary journey he knew how to touch different fields of interest, such as science and semiology, giving life to masterpieces that have had – and continue to have – a global success. Among these we remember the trilogy “Our ancestors”, Le cosmicomiche, Il Castello dei destini incrociati, Marcovaldo and the splendid Lezioni americane.

The cosmicomics, The Tank of crossed destinies, Marcovaldo and the wonderful American Lessons.

As was told, after returning to live in Sanremo – the place of origin of his family -, Calvino joined the II Division of Partisan Assault “Garibaldi” in 1944, after the killing of the physician and commander Felice Cascione. For two years, between enormous difficulties, detentions, escapes at risk of dying, the writer took part in the battle of Baiardo. His name as a partisan was Santiago, from the name of the Cuban town – Santiago de Las Vegas – where he was born in 1925. In addition to the path of the spider nests, Calvino will also write – inspired by that period – the collection of stories Ultimo viene il corvo.

There are many Italian figures who have made the history of our nation. To discover them all, continue to follow us! We will talk about many other characters that are worth remembering.