Home > Music > The chorus of Va’ pensiero in the Nabucco
0
0
Search
Share the article:

The famous aria of the opera Il Nabucco by Giuseppe Verdi

The history of opera is closely linked to our country. Some of the most famous compositions have in fact been made by Italian musicians. One of the most famous is undoubtedly the Nabucco by Giuseppe Verdi. In this work we find Va ‘pensiero an aria among the best known both in Italy and abroad. The text has assumed a patriotic significance.

Italian Traditions leads you on the discovery of this composition that belongs to Italian culture. Here we explain its meaning and we also talk about when it is played.

Nabucco is a famous opera composed by Verdi and presented for the first time at the La Scala theater in Milan on March 9, 1842. It is a chorus of exiles deported to a foreign land. In particular, he speaks of the imprisonment of the Jews and their oppression. In this Verdi recognized the Italian situation of his time, in the period before national unification. The verses were written by the poet Temistocle Solera who was inspired by the verses of Psalm 137 entitled Sui fiumi di Babilonia.

In summary, the story tells of the Jews who are in Jerusalem and who complain of the defeat suffered by the Babylonian king Nabucco. His daughter Fenena is captured and begins a series of intricate events. These also involve Ishmael the nephew of the king of Jerusalem who falls in love with the girl. After having freed her, he runs away with her. However, they are threatened by Nabucco’s other daughter, Abigaille, who is also in love with Ishmael.

Fenena becomes governor of Jerusalem and after having converted to Judaism frees Jews from slavery. Abigaille enters forcefully into the city with a small army. Her father who curses the god of the Jews also arrives. At this point he is instantly struck by lightning. The crown falls to the ground and is taken by Abigaille who proclaims herself as new queen and condemns the Jews to death. The king recovers and tries to regain his crown. At this point the daughter repents of her gesture and poisons herself. So Nabucco resumes his place. 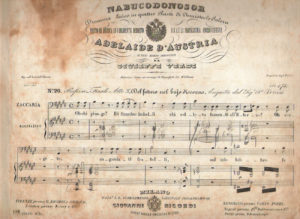 In short, Va ‘pensiero is a chorus that is sung by the Jews in the third part of the opera. The chorus in particular is interpreted as a metaphor of the condition of the Italian people then subject to Austrian rule. Considering that the work, for obvious references, would certainly have been censored by government of Vienna, an allegorical language is used. Inside there is a wide presence of courtly terms as was the practice in nineteenth-century poetry.

In the past it has often been proposed as a national anthem but it has been considered unsuitable because it speaks of a different people from the Italian one. Today it is still often presented on stage and in particular it is played as a penultimate piece during the New Year concert which takes place at the Teatro La Fenicie in Venice. In 1997 Zucchero proposed the Va ‘pensiero in a bilingual version with a widely modified text. The song is contained in The Best of Sugar Sugar Fornaciari’s Greatest Hits.

This is undoubtedly the most famous opera in the world. In fact it is also known to those who are not lyrical enthusiasts. Its importance for history and culture has been fundamental. To find out other interesting information about Italy and its cultural importance we suggest you read this article too. Now that you know the meaning of Va ‘pensiero you just have to go and listen to it.