One of the best known Italian songs

The Italian song is very well known and appreciated all over the world. Some songs in particular have made the history of music in our country and are still sung even abroad. One of these is the song Azzurro interpreted by Adriano Celentano. Italian Traditions leads you on the discovery of this very important and significant song, also talking about the authors and the interpreter of this great success.

It is a piece of music that was recorded by Adriano Celentano in 1968 and was then published on a 45 rpm record entitled Azzurro / Un pugno in una carezza . Its success was incredible and soon entered the collective imagination of Italians. This took everyone by surprise since the song did not belong to the traditional genre of Italian music that was characterized by a melodic trend.

In 1966 Adriano Celentano had included in his team of authors a young man from Asti called Paolo. In those years he started writing some lyrics for the Milanese singer such as “Chi è Lui”. In 1967 he wrote “The most beautiful couple in the world” for Celentano and his wife Claudia Mori. In 1968 he produced Azzurro, in collaboration with the lyricist Vito Pallavicini. This great success made him an important and esteemed musician, starting his career.

In 2007 the same Celentano told the story of the genesis of this song in an interview on the occasion of the death of Pallavicini. The lyricist called the Milanese singer telling him he had a great idea and that he absolutely had to meet him to explain it.

The famous song was composed by Paolo Conte. Born in Asti on 6 January 1937, he is a pianist considered today to be one of the most important and innovative singer-songwriters in the history of Italian music. The success he had during his career was not limited to national borders. In fact, he is also very popular abroad. Over the years it has collaborated with the greatest artists and performers of the Italian song. He has also received many awards and recognitions for his great talent. 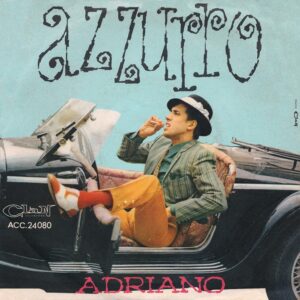 Adriano Celentano is certainly one of the most famous and appreciated Italian singers in the history of music. Born on 6 January 1938 in Milan he has played in his career different artistic roles as well as that of interpreter. In fact he is:

He is credited with having innovated Italian music by introducing a genre that at the time was not present in our country and that was much appreciated by young people of the time.

The song Azzurro received incredible success when it was released. In fact, it was at the top of the list of best-selling albums in 1968. The musical genre of the piece cannot be defined precisely because it is neither a slow nor a rock nor a ballad. It could be defined more like a march. The main themes in the text are love, ecology and religion. Over the years many covers have been made of the song Azzurro.

Italian music is also appreciated beyond national borders. Some pieces that have characterized Italian history and culture in the musical field are well known and are still sung all over the world. The song Azzurro by Adriano Celentano has decisively influenced the musical culture of Italy.