Home > What to Visit > What to visit near Viterbo: the medieval village of Vasanello
0
0
Search
Share the article:

Here’s what to visit in the province of Viterbo

The Italian territory is rich in signs and testimonies of the ancient past that have been preserved until today and can be visited. Vasanello, in the province of Viterbo, was an important center in the times when the Etruscans dominated the region, and today you can still see this medieval village full of testimonies of its past. Among these you can visit the Orsini castle. Vasanello is one of the unmissable places that Italian Traditions invites you to discover.

The original name was Bassanello and was changed in 1949 to the current one to celebrate its ancient pottery making tradition (“Vasari” in Italian). Its origin is Etruscan as evidenced by the findings dating back to the fifth century A. C. and now preserved in the Archaeological Museum of Florence. From this period its fate was identical to that of the other places in the Tuscia region that were dominated by Rome. Subsequently the territory was subjected to the Papal state remaining property of the church for centuries.

The castle and the ceramics museum

The construction of the Castle took place in the fifteenth century on a structure previously built and dating probably in the XI-XII century. According to historical information, in 1285 Orso Orsini built the first keep of the walls in defense of the city. But he remained owner only for four years. In the 15th century the castle returned to the Orsini family, which transformed it into a noble residence. Perhaps the main family of the Roman aristocracy, three of the Orsini descendants were Popes and 34 Cardinals. Adriana Mila, wife of Ludovico Orsini and cousin of Pope Alessandro VI Borgia, stayed here together with Giulia Farnese and Lucrezia Borgia. 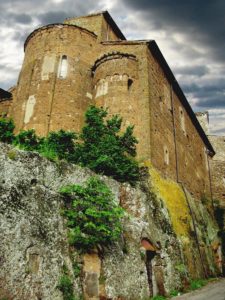 The castle has a square plan with three cylindrical corner towers and has a splendid medieval garden inside. This has been faithfully reconstructed by relying on iconographic and written sources. The intent is to reproduce a garden of native plants from a period prior to the discovery of America. According to information which has reached the present day, it is possible to deduce that these in the past were useful for the sustenance and care of the entire local population. It consists of four sectors:

In the stables of the castle is also the old pottery factory and there is also an exhibition of those made here until the 80s. Its creation dates back to the twentieth century. This took advantage over the years of the collaboration of important artists of the time. The main ones being:

The Castle is open to the public every last Sunday of the month; however, reservation is required and is only possible if the visitors group consists of at least 20 people. Normal ticket for 10 €.

To the Northwest of the inhabited center stands the archaeological area of ​​Palazzolo, with evidence of the settlements succeeded in the area, from the caves inhabited in the Iron Age (Villanovian civilization) to the remains of the fortifications gradually erected by Etruscans, Romans and, later in the Middle Ages in what was both a military and a commercial strategic center.

How to get to Vasanello and how to visit the castle

The medieval village of Vasanello is located in the province of Viterbo about twenty kilometers away from the capital. The Orsini castle is located at the entrance of the town. To reach it from the main Italian cities you can use the car or the train. Driving along the A1 motorway and exiting at Orte it is possible to reach the village. By train it is possible to reach Orte from many Italian cities and then from there a buses are available to take you to your destination.

There are many interesting things that can be discovered in particular for those looking for something to do in Lazio and something to visit in the province of Viterbo. If you want to discover other places, we invite you to read this article too. A visit to the medieval village of Vasanello and its magnificent castle is something that we definitely recommend.