In Italy there are many local traditions and activities such as games and various sports that are still celebrated today. One of these is Florentine football that is practiced in the areas of Florence. Do you want to know more about one of the traditional sports? Well, Italian Traditions today allows you to discover this sporting activity practiced since ancient times. Here we explain what this game consists of and its main rules. In also we will talk about the places where it is still practiced.

Fiorentine football, also known as costume football, is a sport that recalls the game practiced by the ancient Romans called Harpastum. This is a game in which two teams face a ball that is inflated with air. Many consider it as the ancestor of the most beloved game in our country, that is football, but because of the ways in which it is played, it is perhaps more reminiscent of rugby.

Here is another thing, the practice of using spherical bodies of different sizes to play has spread since ancient times and can be found in every culture. Both the Greeks and the Romans practiced this type of sport. An example is the Nel practiced in ancient Greece and the harpastum which was popular in Rome. This consists of two teams facing each other contending a ball that was filled with rags or leather. According to tradition, Florentine football derives directly from this widespread activity in the Roman Empire.

The earliest sources that testify to its existence date back to the late medieval period, that is the end of the fifteenth century. However, certain information has arrived regarding its widespread diffusion in the early part of the century among young Florentines. In fact, these used to play in the streets and squares of the city. In the following years it was regulated and practiced only in the main squares of the Tuscan capital.

But that’s not all, in fact the modern re-enactment takes its inspiration from the famous match played on February 17th , 1530 when the Florentines faced by the siege of Charles V started playing in Piazza Santa Croce anyway. Its popularity lasted throughout the 1600s. The last game played was that of January 1739. Its rebirth took place with the game organized in 1930 to celebrate the event of the 400th anniversary of the Siege of Florence. Today there are 3 matches in June for the patron saint’s day and take place in Piazza Santa Croce. 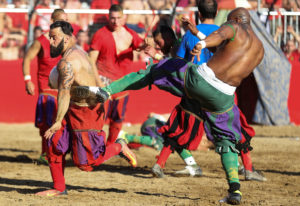 The rules of the game

The rules of this ancient game have undergone considerable changes over the centuries. Today we refer to those published in the sixteenth century. These are summarized within the text written by Giovanni Bardi. The game lasts fifty minutes and is played on a rectangular field completely covered with sand. This is divided by a white line into two squares of equal size. Two nets are placed at either end. The members of each team are 27 and are called by the name of calcianti.

In short each of the two teams has its own players on the field divided by roles. So depending on the position occupied there are:

To direct the game there is a Referee who is helped by 6 markers. In addition there is also a Judge Commissioner who remains outside the field. Above all there is the field Judge. His role is to control the regular conduct of the game and to intervene to maintain discipline and restore order in case of fights on the playing field.

Consider this, the aim of the game is to succeed by any means in depositing the ball within the opposing net that is at the bottom of the field. This shot must be made with great precision because if it ends outside 1/2 point is awarded to the opponents. At each score the two teams must exchange the field. A very interesting thing is the prize that is given to the winning team. This is a Chianina calf that is given by the Master of Field to the winners.

As you have seen this ancient game brings back to life ancient traditions. There is much more interesting information concerning this recreational practice rooted in a specific area of ​​the peninsula. Now that you know what Florentine football is, you can also discover other trivia and news about this traditional game.