Scarzuola, in the municipality of Montegabbione – in the province of Terni, is an Umbrian town where the Milanese architect Tommaso Buzzi created his “ideal city”. A city designed and built, according to an imaginative and fantastic plan, just like a real theatrical scenery.

Buzzi’s ideal city was built between 1958 and 1978, directly inspired by important as well as fascinating architectural references. Among these, there are references to the Villa Adriana of Tivoli, to Villa d’Este, to the Parco dei Mostri di Bomarzo, to the seven buildings of the Acropolis of Athens, to the Pantheon and the Colosseum of Rome and to the Clock Tower of Mantua. The architect, however, deliberately left the work unfinished. It is a place made of labyrinths, spiral structures, towers and amphitheatres recalling the style of Andrea Palladio. 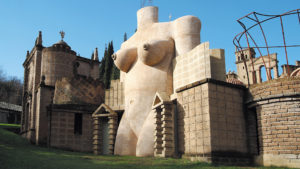 For its construction, Buzzi bought a piece of land where legend has it that Saint Francis of Assisi lived. Here, in fact, the patron saint of Italy is meant to have built a hut, where he planted a rose and a laurel bush, and where a miraculous fountain flowed. In that same point, afterwards, the Counts of Marsciano built a church and a convent of the Minor Friars. Buzzi, therefore, acquired the entire complex, to give shape to his extraordinary project, which stood alongside the older buildings. At his death (1981), it was his heir Marco Solari who completed the work, starting from the sketches and drawings left by the master. 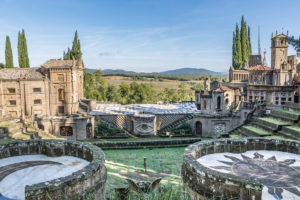 The ideal city extends into a spiral made up of pergolas. Within this scheme, a vertical axis departs from the statue of Pegasus, passing through a complex system of terraces, touching an amphitheater, a tower, a theater which has a stage with a musical labyrinth, to finally reach the Acropolis. All the constructions that make up the vast work are full of symbols, quotations and secrets that refer to the pagan and Roman culture as well as to the Christian, Renaissance and even magic. In fact, the architect’s intention was to create a sort of “initiatory path” in which to create a confrontation with the unconscious and with the most important archetypal figures studied by Carl Gustav Jung. For this reason, the path taken by the visitor within the ideal city leads to a greater awareness of himself, in a metaphorical journey of knowledge and rebirth of his most hidden and profound self.

Buzzi himself described his Scarzuola as “an oasis of recollection, study, work, music and silence”, but also a “realm of fantasy, fairytales, myths, echoes and reflections out of time and space “, in which to find” echoes of a long past and notes of the future “.

Tommaso Buzzi was what today would be defined as an “archistar”, representing one of the most important and most popular architects of the twentieth century. His work, in fact, was particularly appreciated and requested by the largest and richest Italian families, including Agnelli and Pirelli.