Home > What to Visit > The most beautiful villages in Italy
0
0
Search
Share the article:

Italy, as we know, boasts the greatest artistic heritage in the world. And it is certainly a real “paradise” of villages, or of those small historical centers that as well as architectural, are also historical and artistic jewels. In these places suggestive architectures, castles and towers, alleys and monuments contribute to create unique atmospheres, which are usually combined with eno-gastronomic attractions, ancient traditions and naturalistic attractions.

Among all of them, choosing the most beautiful villages in Italy is not easy, as there are so many small towns worthy of being visited and experienced. So, in this case, the easiest way to go was to start from the north and go down to the south, chosing those that are some of the most beautiful, fascinating and attractive villages, of which we are “spoilt for choice”.

Riccetto di Candelo is considered the “medieval Pompeii” of the Biella area. Born as a warehouse for agricultural products, Riccetto became a fortified village, surrounded by walls, in the center of which stands the Palazzo del Principe and the Palazzo Comunale. The village is immersed in the Baraggia Nature Reserve, which is a naturalistic unicum. Here Ysangarda developed, a place linked to myth but also a real place, which owes its name to the Germanic term Ysen-Gard (attested for the first time in 1155), which means Sacred Fence. The town is a point of reference for wine production and for the fine wines of the Biella area. 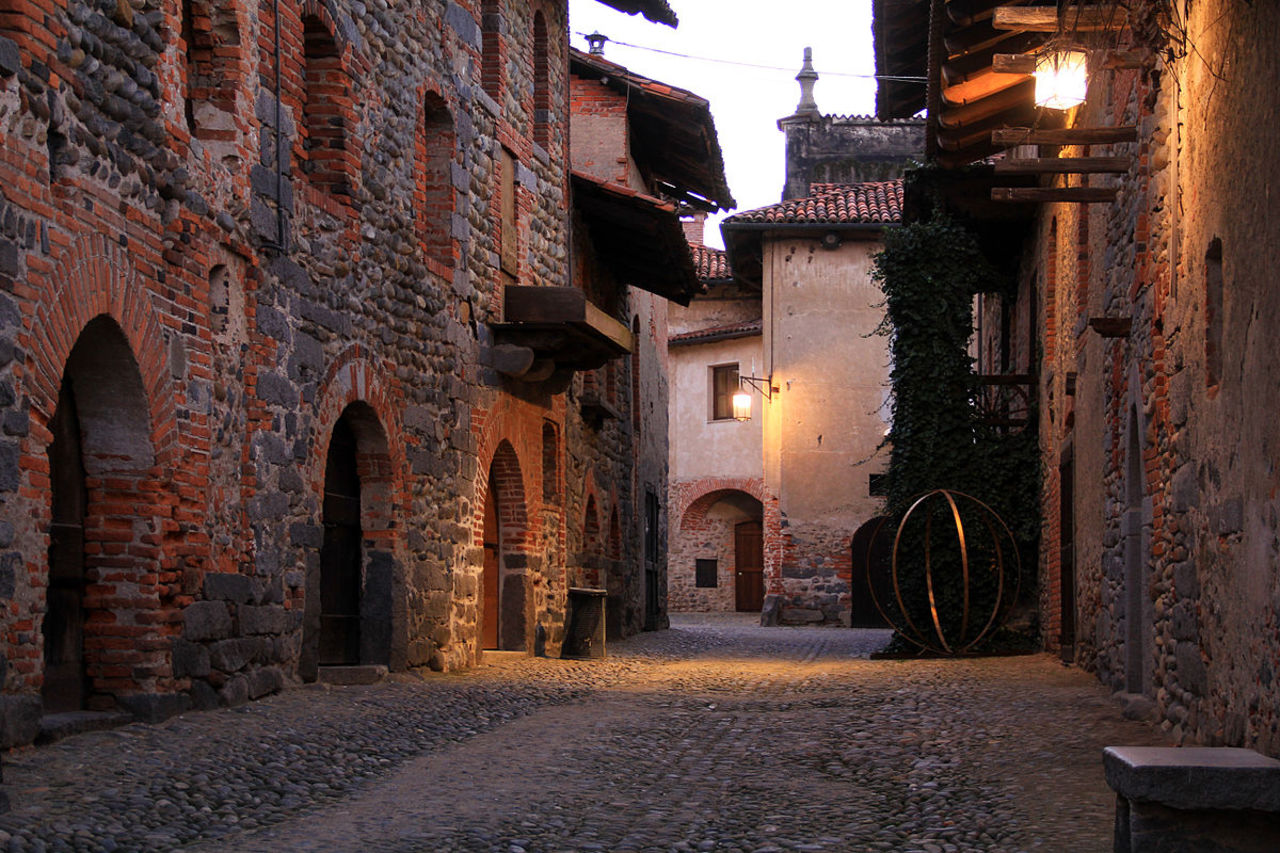 Castelrotto is in the Tyrolean area, in the Sciliar Natural Park, in the province of Bolzano. The village is characterized by traces of the Castelvecchio, a medieval fortification, of which today remains a massive square tower and traces of a fortified village. The facades of the houses were decorated by the painter Eduard Burgauner and his uncle Johann Burgauner, with the intention of transforming the village into a work of art. Castelrotto (Kastelruth in German, Ciastel in Ladin), in fact, proposes a style that combines Art Nouveau and the ancient local Baroque tradition, of which the facades of the former Hotel Zum Wolf, as well as the Rauch and Mendel houses are fascinating examples. The Krausen Piazza (named after the noble Hungarian family who resided here), houses the seventeenth-century Town Hall, a high bell tower and a neoclassical style church, as well as the Costume Museum, which displays traditional Tyrolean costumes. In the Town Hall it is worth seeing the Council Chamber, clad in wood, and the sixteenth-century room, also in wood and with a coffered ceiling. In the village you can also see the Golden Rossl and the Zum Wolf, two hotels that were active in the seventeenth century, and the historic buildings, concentrated in the streets Oswald von Wolkenstein and via Platten. On the hill overlooking the village, and where the castle once stood, there was the Locanda della Torre, open since 1500, which later became the Court house.

This village owes its name to the nearby torrent of the same name, and it was first the Celtic-Ligurian Boiel and then the Latin Bobium. The village history is bound to the Trebbia Valley, in the province of Piacenza, an important communication route since the days of the Lombards, and of pilgrimages to Rome. The Abbey of San Colombano was founded here in 614 to become an important political and cultural center as well as a religious one. Its historical center has gone through history perfectly preserving its characteristics of a typical medieval center. A testimony to this is the so-called Ponte Gobbo – also known as the Ponte del Diavolo – originally built by the Romans- which crosses the river Trebbia. In the inhabited center stands the Museum of the Abbey, set up inside the ancient scriptorium, in which you can see exhibits from the monastery and the ancient city, including the majestic tomb of the Cocceia family, an altar dedicated to the goddess Diana and Lombard and Carolingian marbles and stones which come from the Basilica of Agilulfo. In addition, the surrounding area of Bobbio is also worth exploring. It is crossed by the river Trebbia, and has a thermal establishment, located in San Martino. . 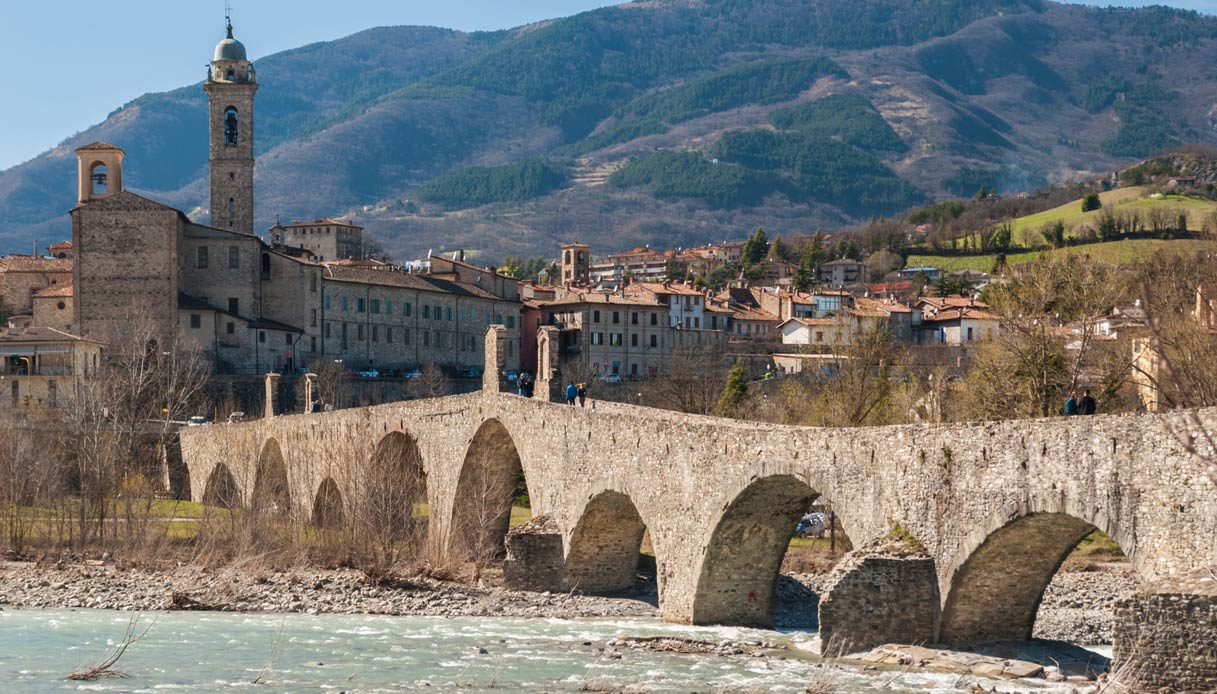 Of Etruscan origin, Pitigliano, in the province of Grosseto, boasts a legendary Latin origin. Two Romans, Petilio and Celiano, from whom the Gens Petilia descended, are meant to have founded the village which bears their combined names giving life to Pitigliano. The village is characterized by the volcanic rock that – over the centuries – has been excavated to build it. The tuff is a particularly easy rock to work, and gave life to a real “tuff civilization”, born with the Etruscans and continued until the present day. All around the village, in fact, are traces left by the ancient inhabitants of the area, which dug tombs, hypogea, tunnels and the mysterious “Vie cave”. In addition to the walls that are still visible for some stretches. In the village, however, the Jews, who lived here for 500 years, dug and adapted the caves of which the area was scattered, using them as places of worship. So, today, Pitigliano offers an extraordinary world that hides an underground city, rich in rock churches, tunnels, water channels, columbaria, stalls and cellars. The village, which stands on a high tufaceous cliff, surrounded by verdant valleys, offers a truly magical spectacle. In the center stands the medieval Palazzo Orsini, renovated in the 16th century by the architect Antonio di Sangallo in Renaissance style. Today Palazzo Orsini houses the Museum of Sacred Art, the Fonte Medicea and the seventeenth-century aqueduct. All around the town is a fascinating network of picturesque alleys, stairways, loggias and sixteenth-century decorations. The Cathedral houses the paintings of Pietro Aldi and Francesco Vanni, and, beside it stands the bell tower and the monument dedicated to the Orsini family. Pitigliano is full of history, and its inhabitants – over the centuries – have left traces that give it a truly unique charm, even from a gastronomic point of view . During the Christmas season, in fact, in this village the “Sfratto”, is prepared, it is a stick-shaped cake prepared with honey and walnuts, which keeps its ancient Jewish origin. 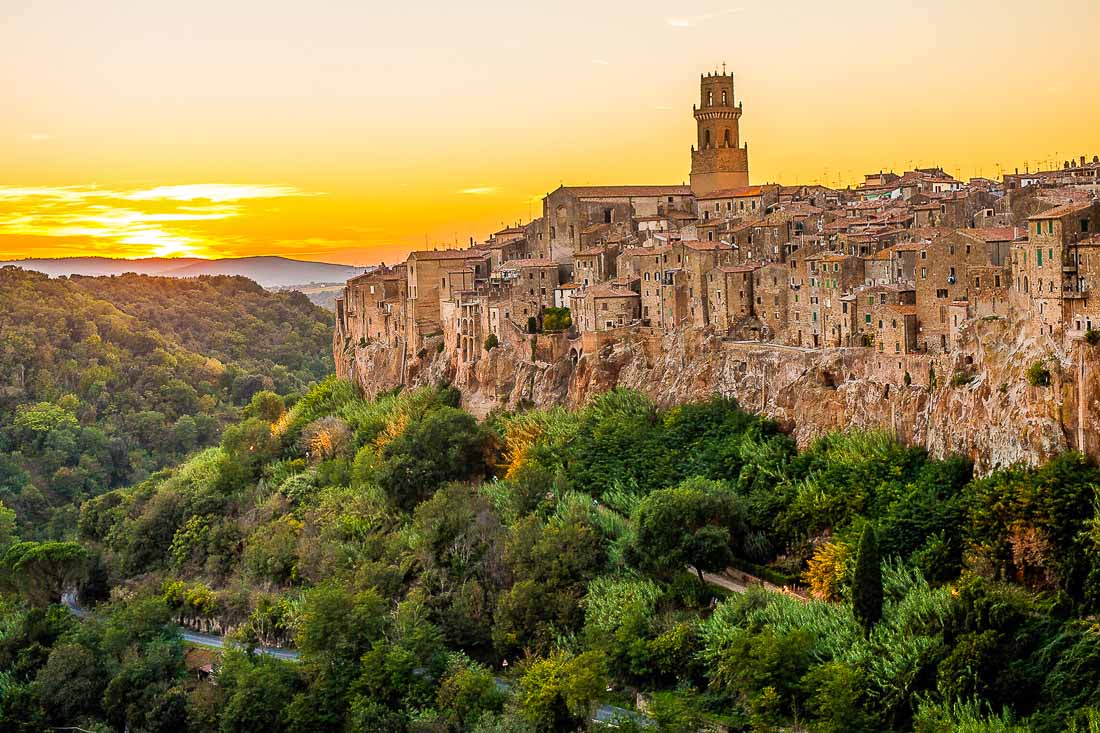 Bagnoregio, or “The King’s Bath”. This name dates back to the Longobard era, and indicated a royal property, perhaps linked to a thermal bath that rose in the area, whose waters – according to the legend – are meant to have healed the wounds of King Desiderio. Civita di Bagnoregio is, to be precise, a fraction of the Municipality of Bagnoregio, in the province of Viterbo, which stands on a vertiginous hill surrounded by two valleys characterized by “gullies”: the Fossato del Rio Torbido and the Fossato del Rio Chiaro. Civilization is connected to the village by a long pedestrian bridge suspended over the void, and inhabited by about twenty people, in what is called “The dying city”.

The foundation of the city dates back to the Etruscans, witnessed by the urban layout itself and by traces of walls and a necropolis. The so-called Grotta di San Bonaventura, which is said to have seen San Francesco heal the little Giovanni Fidanza, the future San Bonaventura, is in fact an Etruscan chamber tomb. The look of the village, however, is completely medieval. The small town has always had to deal with erosion, which over the centuries has eroded the tufaceous rock on which the village stands and of which it is built. This is evidenced by the interventions carried out first by the Etruscans and then by the Romans to contain the action of the waters.

The village hosts the church of San Donato, on the main square, which houses a beautiful wooden Crucifix, and Palazzo Alemanni with the Geologic museum of landslides, the Palazzo Vescovile, the 16th century mill and what remains of the birthplace of San Bonaventura . Civita di Bagnoreggio is also home to a famous living nativity scene, set up each year among the medieval streets and buildings. 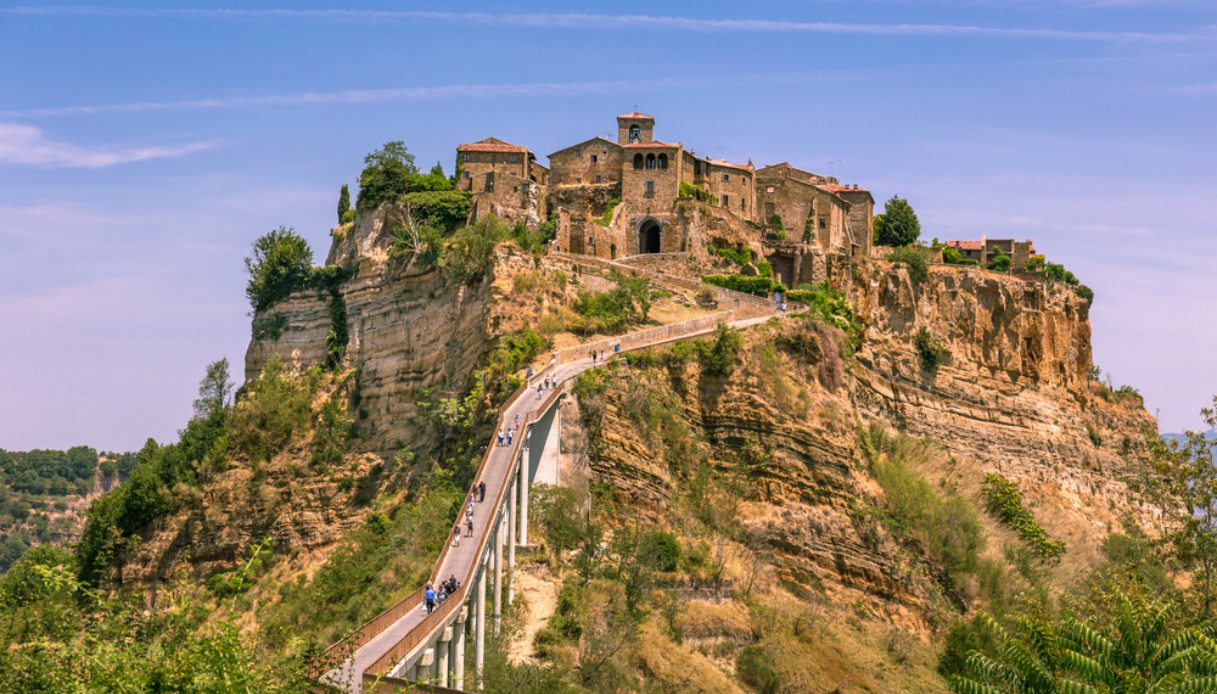 Atrani is a small village on the Amalfi Coast, overlooking the sea and literally clinging to the rock of Monte Civita and Monte Aureo. The foundation of the church of San Salvatore Birecto dates back to 940, and later became the Palatine Chapel of the Amalfi Republic. For a long time, it was subjected to raids by the Saracen pirates, and then devastated by the Pisans in 1135. So much so that the Swabian king Manfredi brought it back to life in 1274, reconstructing the Collegiate della Maddalena in 1274. The ruins of the Benedictine monastery of the SS Quirico and Giuditta, the Bronze Door, twin to that of the Amalfi Cathedral, and the Tower. The charm of Atrani is all enclosed in the beauty of its center, made up of alleys, arches, courtyards, squares and “stairways”, and houses leaning against each other to make the most of the small space available. In the lower part, the houses overlook the beach, then it rises up towards the square and the stone fountain, until you reach the most steep and rocky parts. In 1931 Atrani was portrayed by the great Dutch draftsman and engraver Maurits Cornelis Escher, who drew numerous glimpses of it, including that of the inhabited area seen from above (from the Torre dello Ziro), with the church and the bell tower of La Maddalena, and alleys. 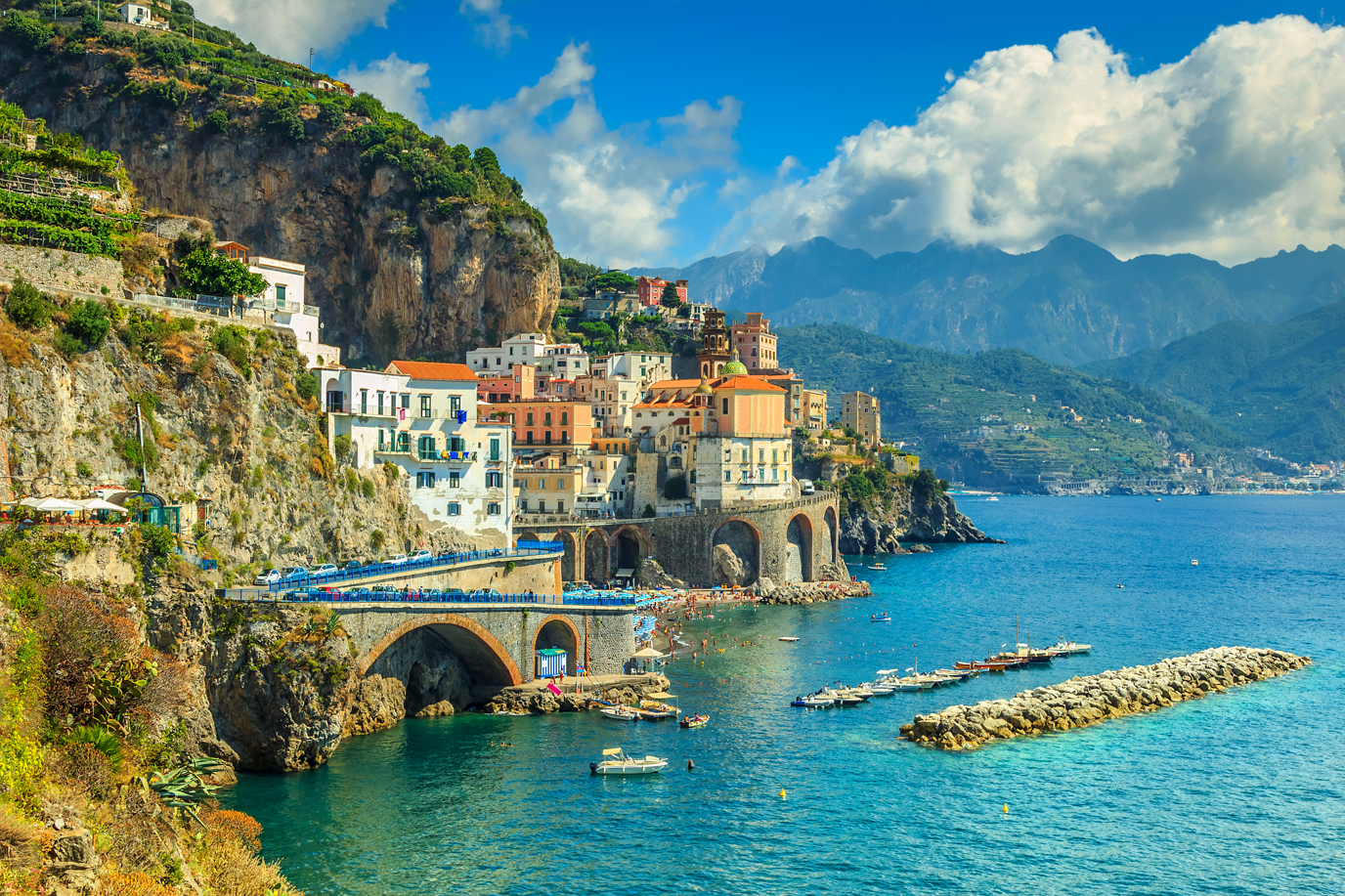 The history of Sanbuca (in the province of Agrigento) dates back to the era of Arab domination in Sicily. Founded by an emir, Al-Zabuth – this village grew over time with a dual identity: the Arab one, in fact, visible in the historical center, and the eighteenth century one, developed outside the walls. Its charm is enclosed in the historical center, a labyrinth of narrow alleys and squares – the “Arab quarter” – and in the castle protected by crenellated walls. Not to mention the nearby fortress of Mazzallakkar, which lies on the shores of Lake Arancio, which is periodically submerged by the rising of the water level. An Islamic population resided in Sambuca until the 13th century, leaving an indelible mark, but then it was swept away by the arrival of Frederick II. However, Palazzo Panittieri dates back to 1510, as do the new neighborhoods of a village that was reborn after the destruction of the Muslim community. During the seventeenth century, the town was then enriched with noble buildings and churches, including the palaces Ciaccio and Beccadelli, the Church of Carmine and the Monastery of Santa Caterina. 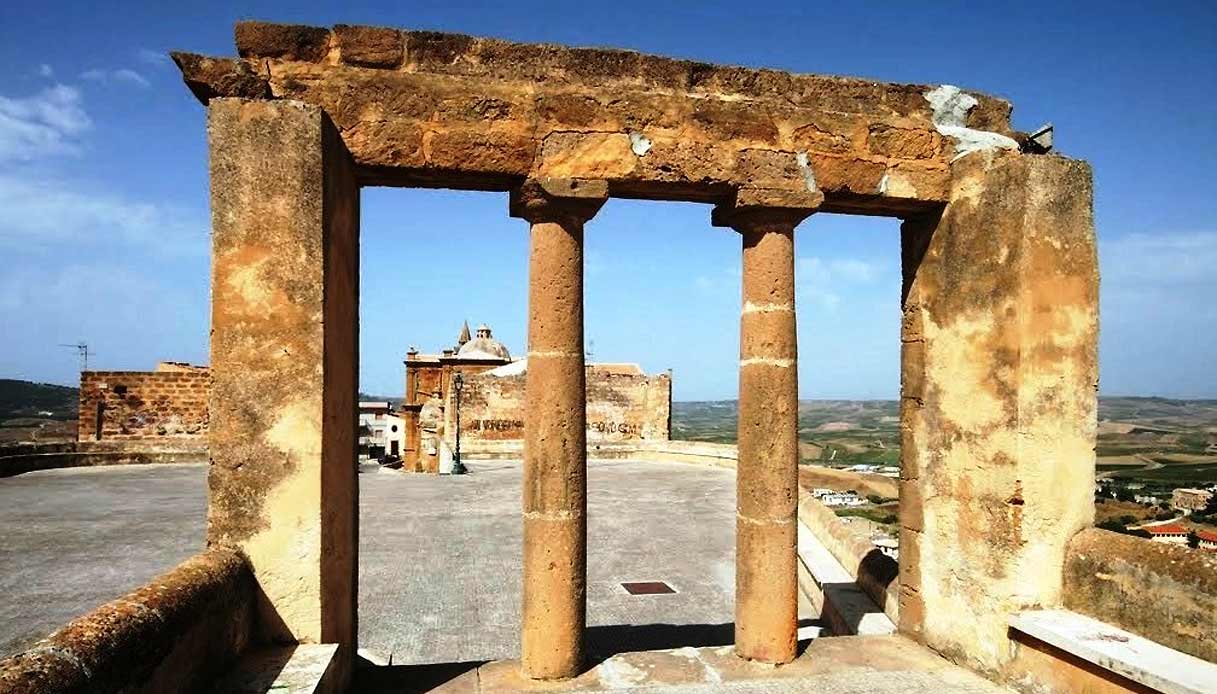