Home > Holidays and Traditions > The most suggestive Easter rituals in Italy
0
0
Search
Share the article:

Religious holidays represent for Italy a huge heritage of culture and traditions. The meaning of the Easter rituals is not only religious, but also social and historical. Among the religious festivities, Easter is in fact the one that boasts the highest number of celebrations, still deeply felt and experienced by the populations of each region. The Passion of Good Friday is, for example, the recurrence that has given rise to popular rituals and manifestations: processions, commemorations and events that often boast a very ancient history and which are passed on from generation to generation. 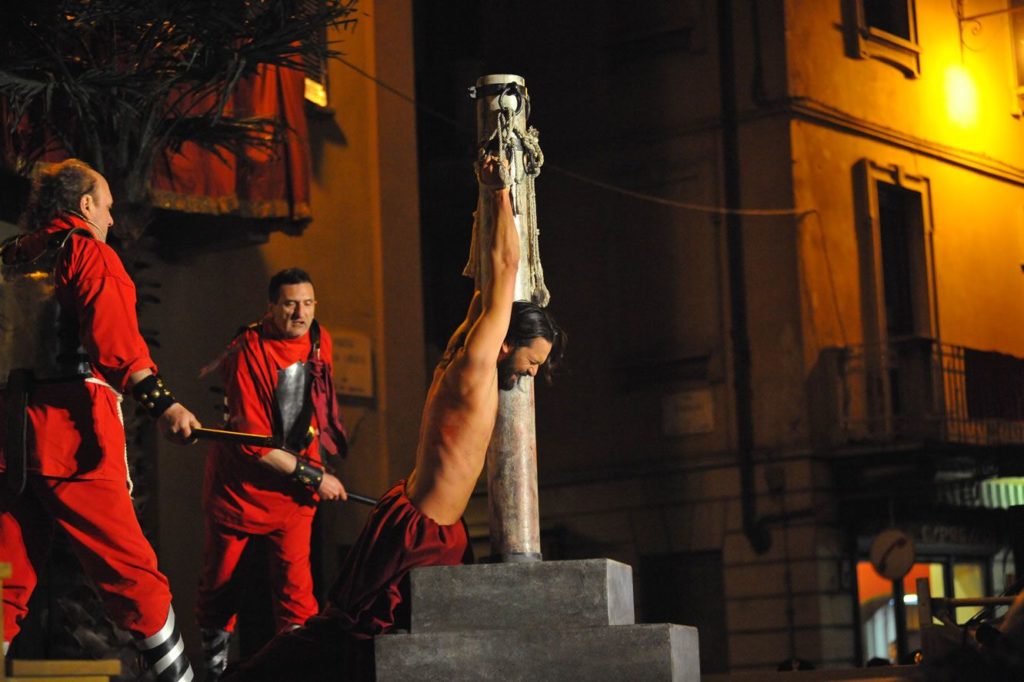 One of the most suggestive Easter rituals in this region takes place in Romagnano Sesia, where it is a custom to perform the scene of the Passion of Christ on the days of Thursday and Good Friday. For the occasion are created living representations that cross the streets of the center giving life to a great itinerant show that also involves the spectators. In Vercelli since 1883 the Procession of Machines, has been held with eight large sculptural groups that are carried through the streets in procession. 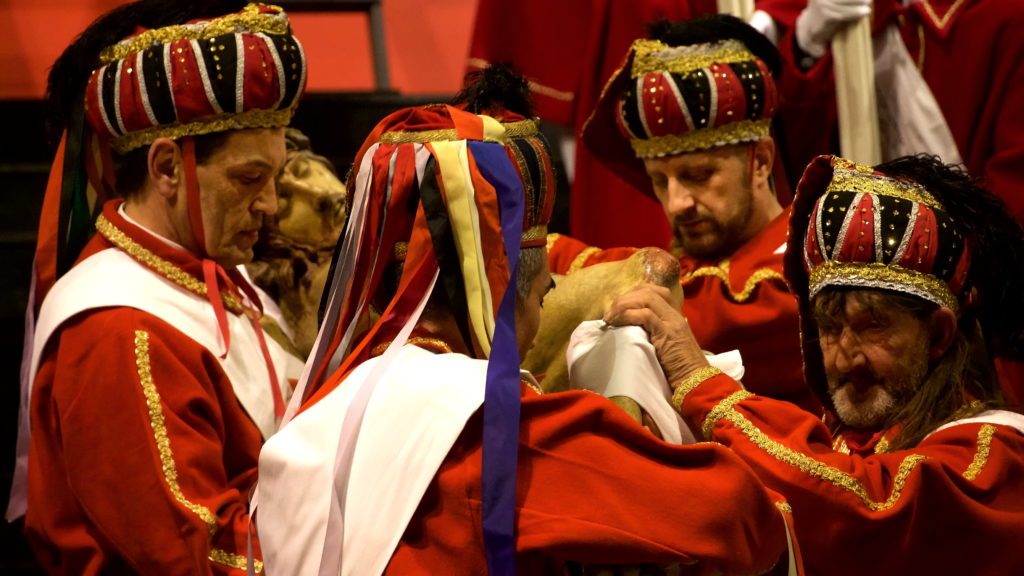 In Vertova, in the province of Bergamo, the Procession of Good Friday sees the parade of Jews and Roman Soldiers. A faithful is called to represent Christ, barefoot and clothed with a red robe, while a statue of Christ is transported on shoulder by the faithful. In Mantua instead is held the opening and the exposition of the Sacred Vases, which contain the relic of the Precious Blood. The latter will later be taken in procession through the historical city center. 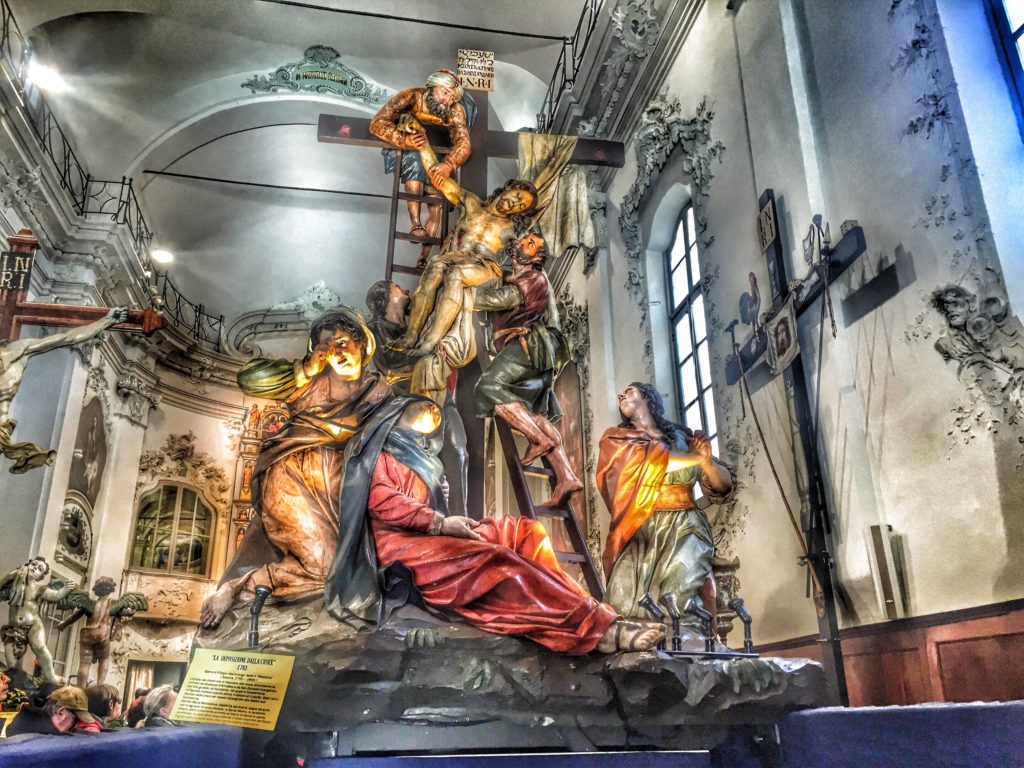 Easter rituals in Liguria involve the procession of good Friday in Savona that sees 15 wooden cases transported on shoulder containing 15 sculptures of great artistic value. These statues tell the story of the Gospel. Following is the procession of the Arc of the Holy Cross, that holds a relic of the Real Cross 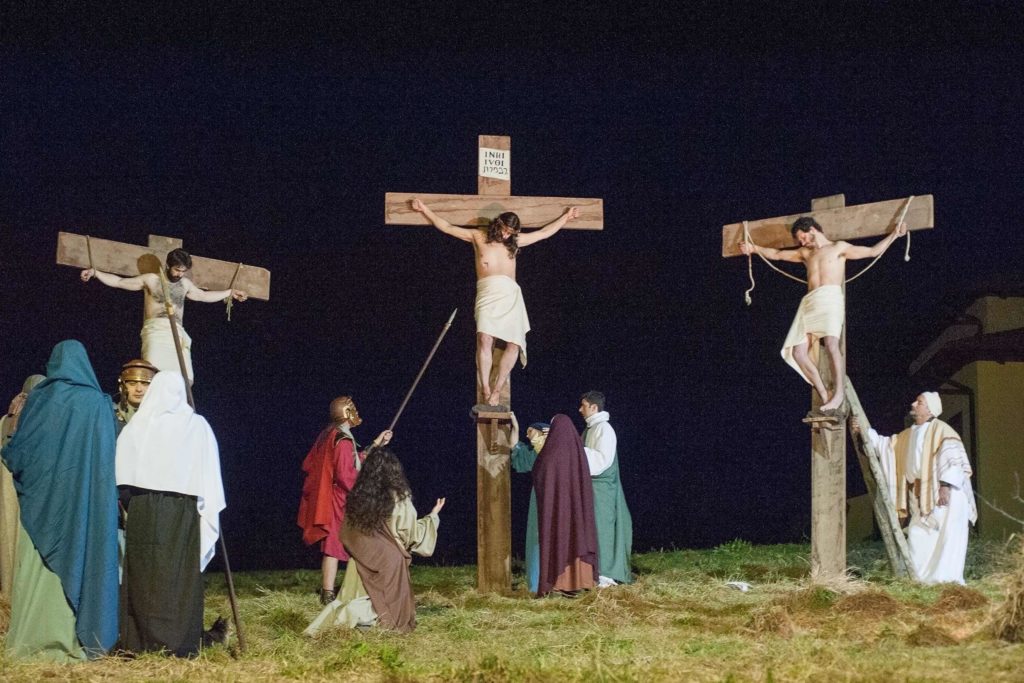 In Frassinoro in the province of Modena, among all the Easter rituals there is a really important living representation of the Stations of the Cross. The inhabitants of the village in fact, organize themselves in order  to make living scenes of the various phases of the crucifixion. 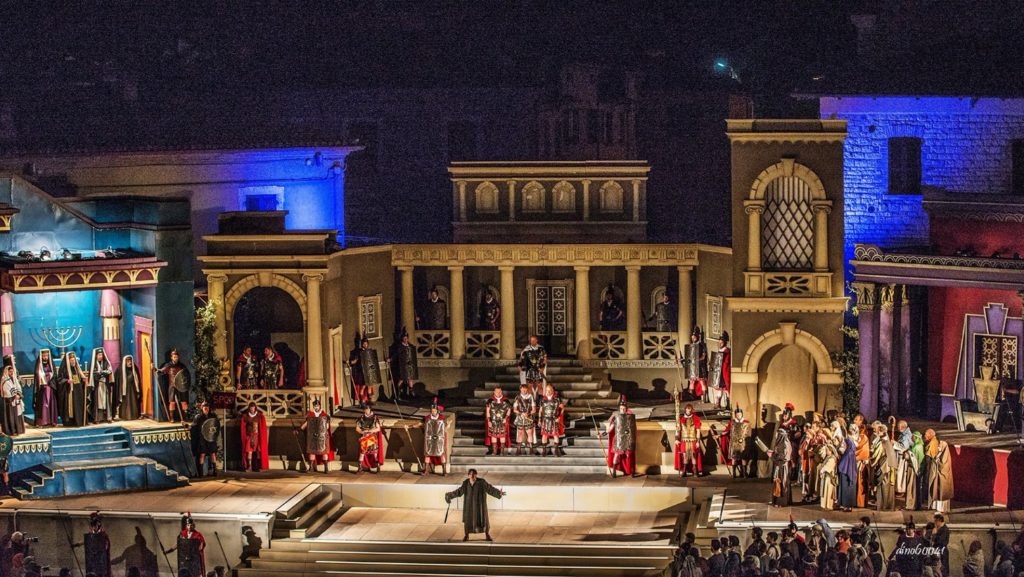 In the village of Cantiano, in the province of Pesaro and Urbino, during one of the Easter rituals, the faithful, along with the Turba (a large group of characters wearing Jewish and Roman costumes) follow the most important phases of the passion: the last supper, the trial, the flagellation, the ascent to cavalry. This last scene takes place at night, by torchlight. 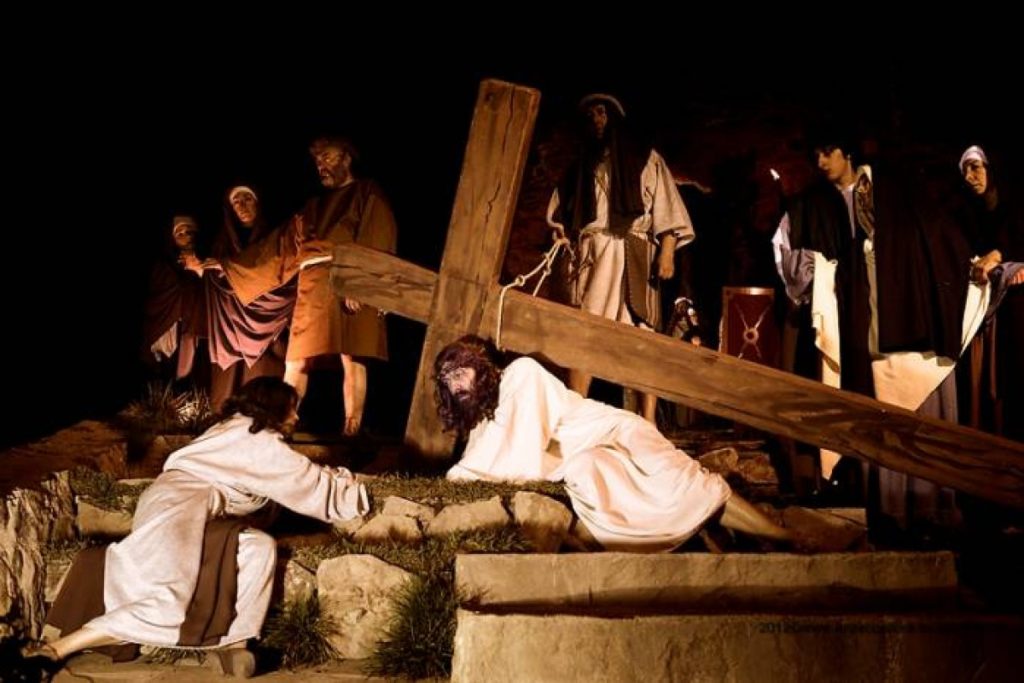 The ritual of the deposition of the crucifix and the encounter of Christ with the Madonna Addolorata are also celebrated in Assisi among the Easter rituals. In remembrance, the processions pass by the cathedral and the Church of St. Francis. In Gubbio, another Franciscan place, the procession of the Dead Christ is held on the day of Good Friday. 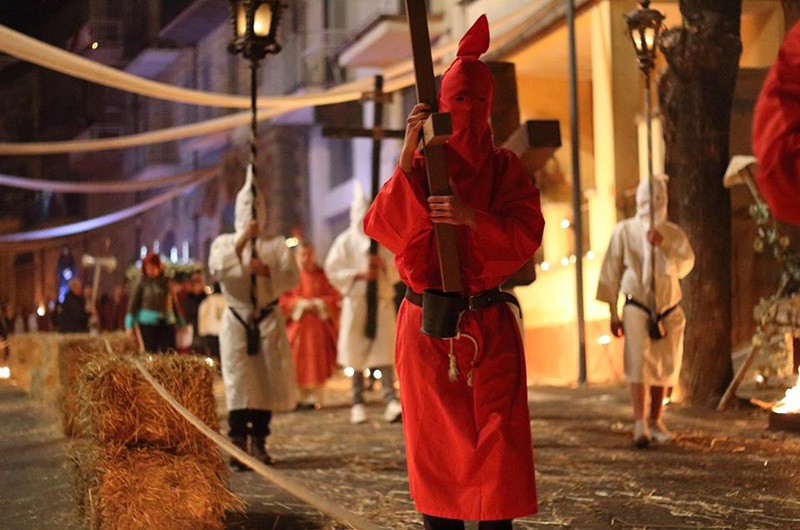 The procession of Good Friday in Orte, in the province of Viterbo, is one of the oldest rituals of Easter in Italy. In the evening, the confraternities of faithful walk in procession carrying crosses and symbols of the passion. The penitents follow barefoot with chains around their ankles, followed by the coffin of the Dead Christ, and the weeping Mary dressed in black. The statue of Sorrows closes the procession. At the end of the procession, flowers are distributed to the faithful. 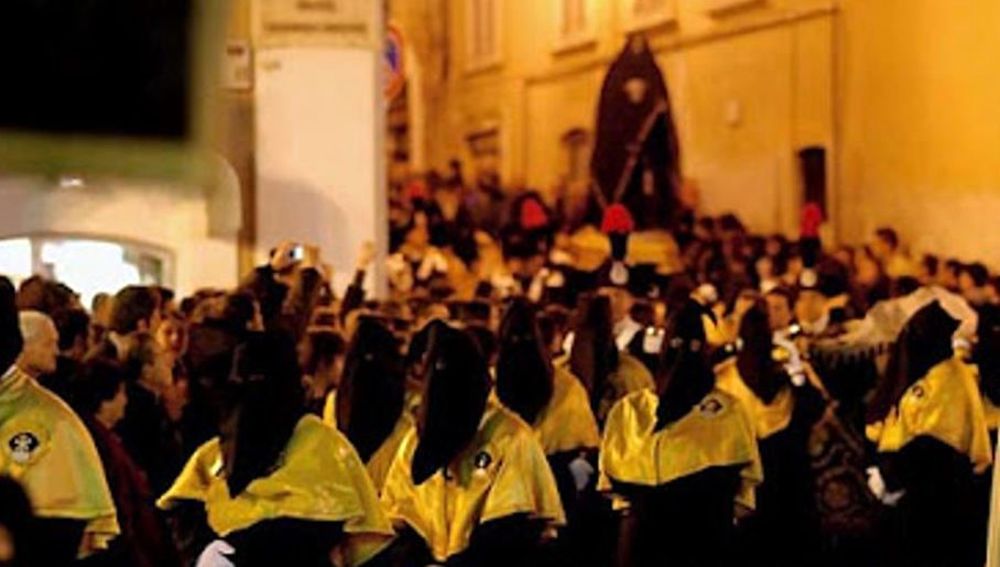 The Procession of Good Friday in Chieti dates, back, to ‘842, and is the oldest in Italy. Hundreds of participants take part together with 13 congregations. The ceremony is organized by the Brotherhood of the Sacred Mount of Monti, originated in the 17th century. The tradition of the 150 singers and 150 players accompanying the hooded procession dates back to the 18th century. More recent is the custom of transporting the sculptures representing the passion that goes back to the 19th century. 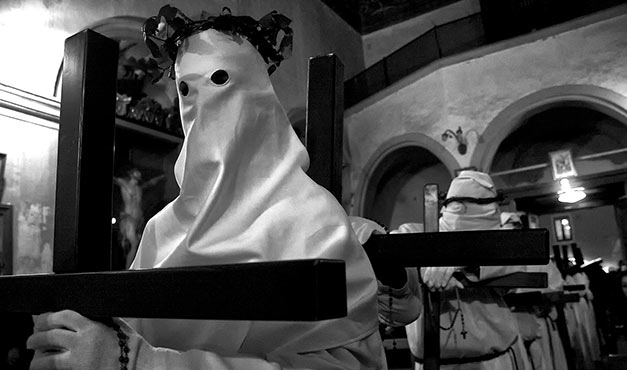 Among the rituals of Easter there is the procession of Good Friday in Isernia in which the hooded penitents take part. Apart from the hood, the participants also wear crowns of thorns on their heads, while about 100 faithful have the task of transporting heavy wooden crosses and statues. 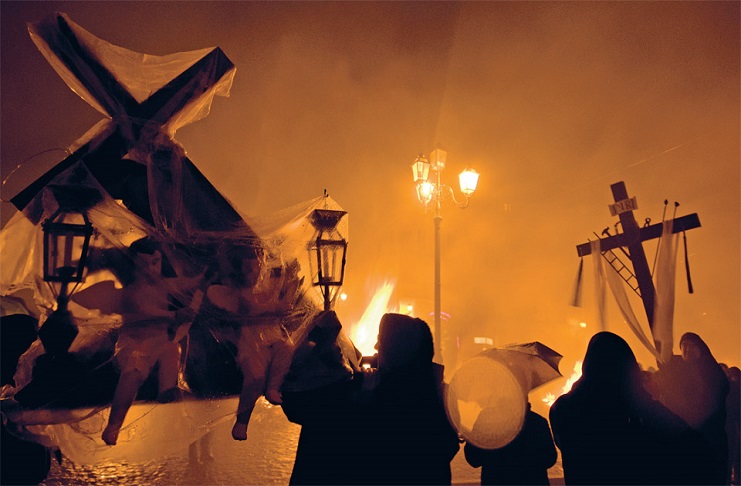 In Calitri, in the province of Avellino, the procession of Good Friday is also called Procession of the Mysteries. The rite is particularly solemn, and involves the members of the Arciconfraternita of the Immaculate Conception dressed in white, with hooded cape and crown of thorns. These carry a cross on their shoulders to the top of Calvary Hill. The ritual came about at the time of the First Crusade, when a knight returning from the Holy Land brought with him a piece of the Cross of Christ. 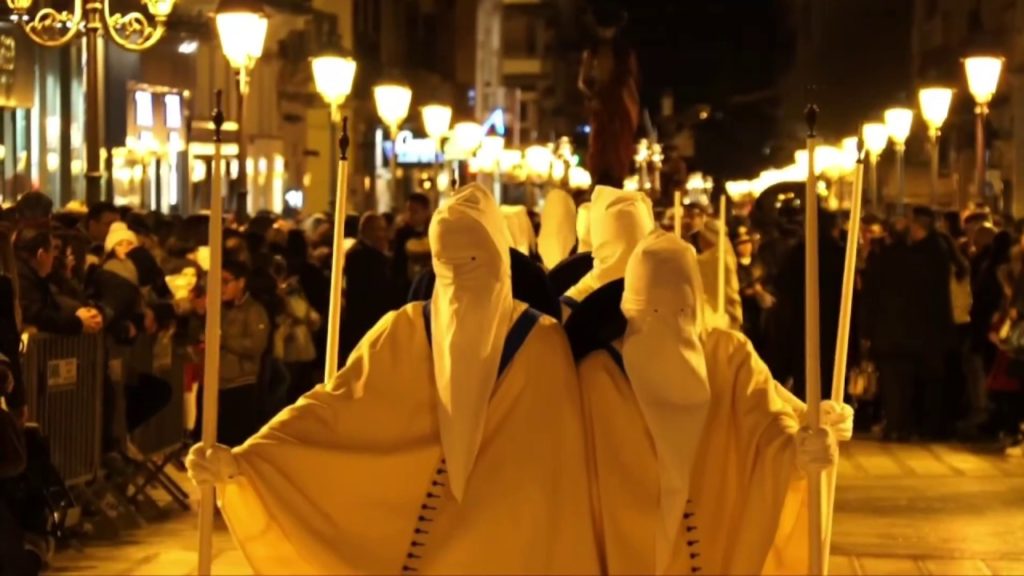 Among the Easter rituals the representation of Thursday and Good Friday in Taranto is perhaps the most heartfelt and participated in Puglia. It includes three processions:

-The “Perdùne”: which sees the pilgrims who went to Rome for the jubilee, wearing a long white hooded cape, surmounted by a black hat. Pilgrims parade barefoot on Thursdays from the afternoon until nighttime.

-The Procession of the Addolorata which is officially opened by the “Troccolante,” who keeps the rhythm by playing the “Troccola,” a wooden tablet equipped with iron teeth: four kilometers of procession in more than 10 hours.

-The Procession of the Mysteries starts on Friday: The statue transporters participate together with the simulacrum of Dead Christ, and it ends at dawn on Holy Saturday. 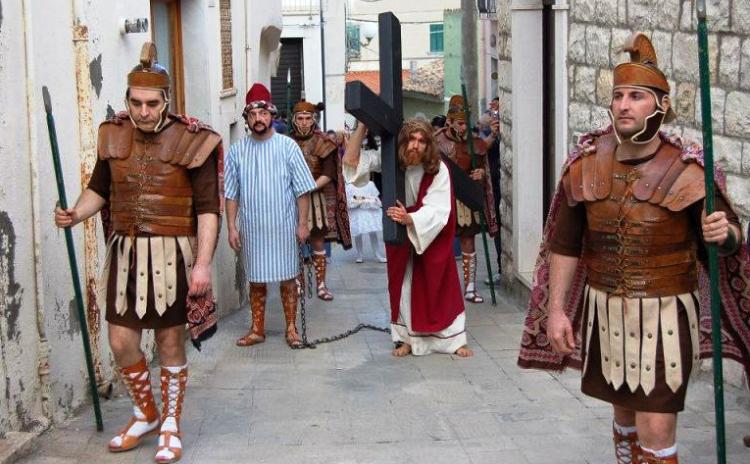 About 100 figures give life to the representation of the Passion in Barile, in the province of Potenza. The procession of a few kilometers, sees the involvement of some pagan characters like the Gypsy, the woman who according to popular tradition provided the nails with which Christ was crucified, and the Moor, a character who wears flashy necklaces. 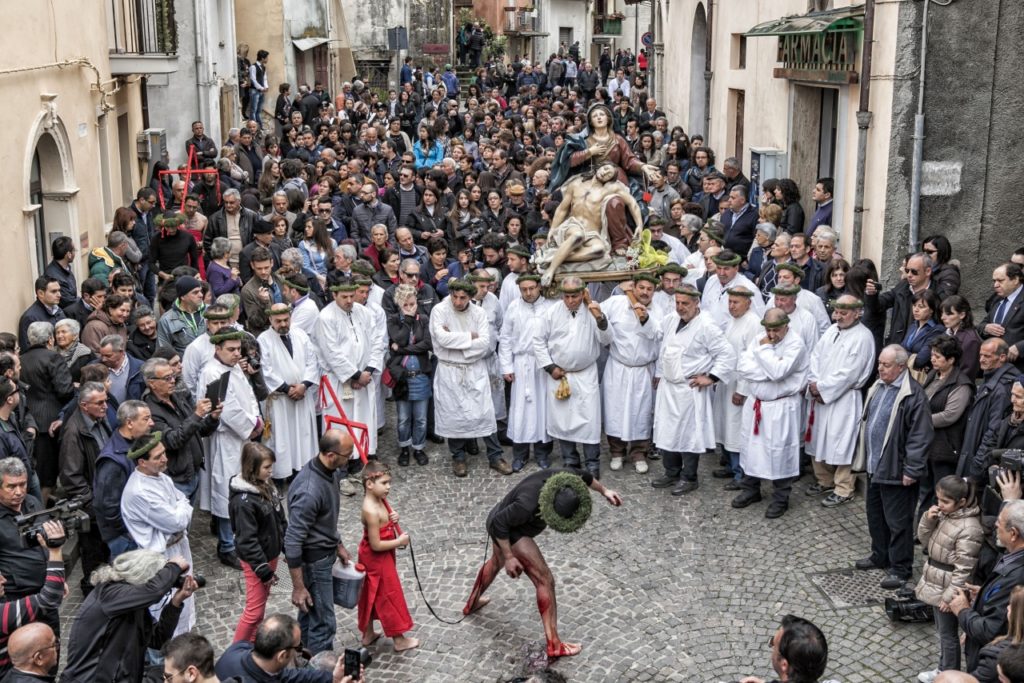 The Easter Rituals, during the Holy Week are particularly intense and participated in Nocera Terinese, in the province of Catanzaro. On the day of the Holy Saturday, in particular, which is the moment of the “Flagellants,” people who lash their own thighs and calves until drawing blood, giving life to a spectacle of rare intensity. Another intense moment is that of the exposition of the Addolorata whose statue, is kept hidden and veiled in a niche all year. The tradition of the “Flagellants,” called “Battenti” (beaters) is also present in Verbicaro, in the province of Cosenza. 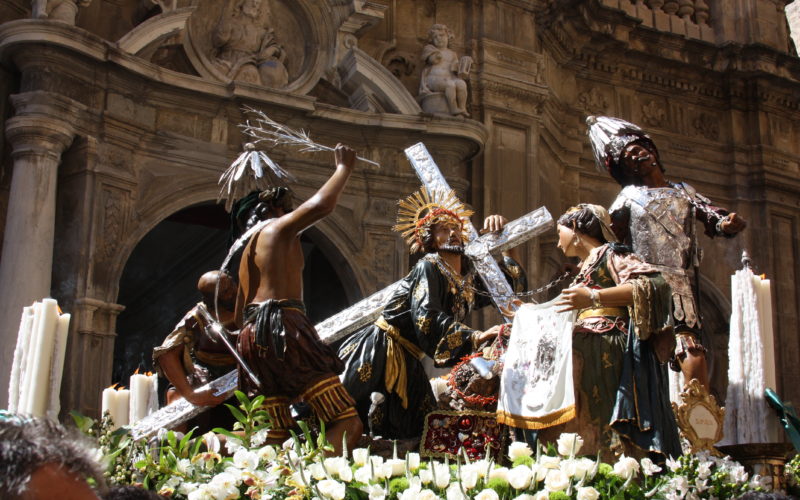 In Trapani the mysteries are celebrated, with a procession – from  Friday afternoon until the dawn of Saturday – twenty sculptures represent the various phases of the Passion. The procession is accompanied by twenty musical bands, by women dressed in black, by hooded figures and by youngsters in traditional costumes carrying candles.

The holy week in Iglesias ends with a procession on Good Friday, that takes place during the evening with an impressive funeral procession, that has Spanish origins. Alghero on the other hand stands out for the raising of Christ on the Cross on the Thursday.