Martina Zito
After a long period in which people were forced to save money because of the economic crisis, and thanks to a renewed mindset of sharing and socializing in the free time, the camper van, faithful companion of the summer holidays, takes his revenge! Yes, because if in the rest of Europe campers have continued to travel like in the 70’s, in Italy in recent years, the camper van has given way to planes, cruises and hotels.
Did you know that the Veneto is one of the favorite Italian destinations for foreign tourists in freedom, followed by Trentino, Lombardy and Tuscany? Or that there is an RV that can expand with the simple press of a button? Discover with Italian Traditions fun facts about different types of camper vans!

Tourism by motorhome is a very important resource for municipalities provided with adequate accommodation. From surveys on the consumer profile clearly emerges the attention towards the territory and local specialties, the strong interest in food and wine, as well as to the handicraft production.

As it emerges from the data of the Bank of Italy, 3 out of 4 foreign tourists choose the Belpaese for a vacation in caravan or tent. Every year more than 3 million of Italian tourists and 2.6 million foreign ones decide to visit the Italian peninsula aboard a camper, generating an annual turnover of 2.7 billion Euros which all remain in the Italian territory.

But do we really know what are the differences between a Motorhome, Campervan, Caravan or RV, terms that we often read and that make us feel a bit confused? Although they are categories of apparently similar vehicles, there are several differences between them, differences of structure, size, price and, of course, comfort.

The campervan uses the classic van, changed into a living, with the roof higher than the vans to increase the living space; the motorhome is generally built on a long-wheel base and it differs for the cabin and for a more elegant and aerodynamic structural physiognomy, it is more similar to a bus than a motorhome. The caravan, however, is generally an unpowered vehicle, pulled by a vehicle. 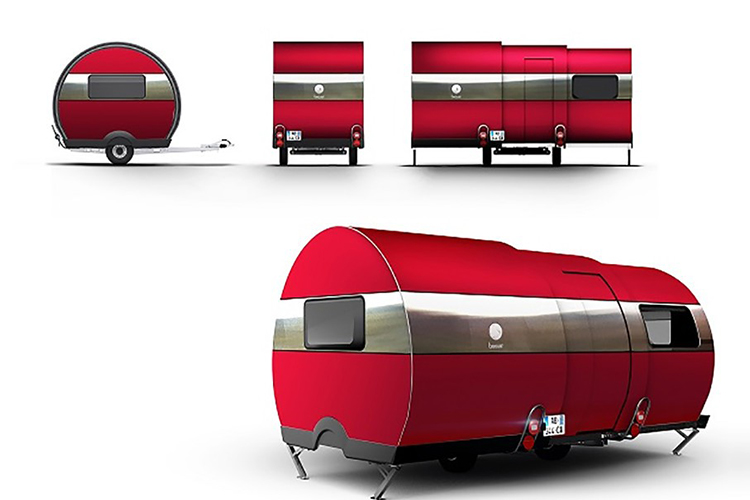 Among the recent innovations in the field of RV, it deserves a mention the BeauEr 3X Compact Extendable Caravan, a vehicle that is small when parked, but expands to three times the size when you reach your destination. With the push of a button, the camper telescopes in about 20 seconds to its full size, providing ample interior space.

The range of products marketed by the French manufacturer has two caravans and a classic camper van, all characterized by the space expansion. Protagonist of a brilliant invention is instead the caravan of the last work of the artist Benedetto Bufalino, entitled “The Caravan dans le ciel“. What happens if I put a hydraulic ladder under a campervan? “. This is the question that the French artist has set. The result is a panoramic view, a dizzying height and a tranquility typical of a 5-star hotel. 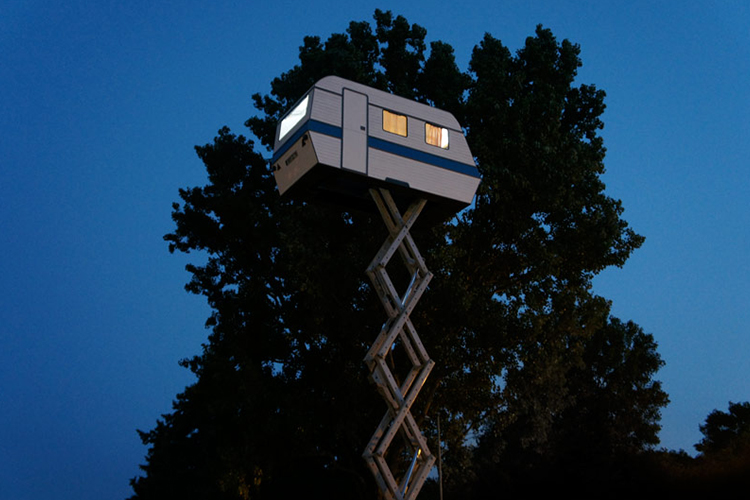 The idea, however, to bridge the gap between the convenience of the camper van and the machine’s practicality, is at the base of the project of the artist and designer Christian Susana, who has created a new vehicle characterized by a futuristic design and modern lines: the Colim (Colors of Life in Motions), a lovely combination between a car and a camper van.

By the way, how many times caravans appear in the movies? There are many films in which they are the protagonists or the preferential location of blockbuster movies. In some cases true masterpieces that use the extraordinary nature of the traveling home to represent the singularity of stories sometimes irresistibly comic, sometimes incredibly dramatic.