Andrea Bocelli has undoubtedly been the most appreciated and loved Italian voice worldwide for at least the last 20 years. Born in Lajatico, in the province of Pisa, Bocelli has become synonymous with Italian style and bel canto at an international level, collecting a huge success not only in terms of image but also for his recording work. 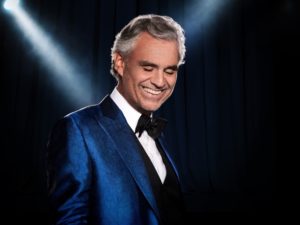 Raised on the family farm, he studied piano at the age of 6, played saxophone and flute, before even discovering the vocation that would make him famous, that of his voice. Visually impaired, Andrea completely lost his sight at the age of 12. But he graduated in Law, and in the meantime took singing lessons from Franco Corelli, a tenor of extraordinary fame and undisputed star of the Opera.

His career as a singer began in 1992, when he took part in an audition for the singer Zucchero, who was looking for a tenor with whom to record his Miserere. The place seemed to be already assigned to the great Luciano Pavarotti, but it was precisely him who advised Zucchero to choose Andrea

Bocelli, considering him absolutely the most suitable to sing that song. In the end, Pavarotti recorded the song, but Bocelli took his place on Zucchero’s European tour. The following year, the singer of Lajatico was contracted by Caterina Caselli with her Sugar, who will enroll him in the San Remo Festival, where he will win in the “New Proposals” category. And back to San Remo in 1994, this time among the professionals, proposing il mare calmo della sera, and then his first album came out that earned him a Platinum Disk. In ’95 he returned to San Remo, this time proposing Con te partirò, then he came out with his second album, Bocelli, which won a double Platinum. The next step was the European tour, where he sang with Bryan Ferry and Al Jarreau:

He sang in front of 500 thousand people, and was followed by tens of millions of TV viewers. His success became planetary, his songs and his records climbed to the top of the charts in many countries, in particular Con te partirò (three gold records in France). The album Bocelli conquers 4 Platinum Records in Germany, selling 2 million copies, 4 in the Netherlands and 2 in Italy. But success does not stop there. In 1996 he released the album Romanza, which – in a short time – got a Platinum Record in most of the countries where it was published. Two years later, Bocelli also dedicated himself to classical singing, publishing Aria, a “classic” album, with which he made a strong impression on the classical music charts, and later Sogno. This is how his commitment in the lyrical field grew, so much so that he recorded the Tosca by Giacomo Puccini, a work considered to be of great technical difficulty. Followed by recordings dedicated to Massenet, Mascagni and Leoncavallo, among others.

The musical and artistic path of Andrea Bocelli continues thus alternating between pop and classic, until 2004, date when he released Andrea, album that collected pieces signed by, among others, Maurizio Costanzo, Enrique Iglesias and Lucio Dalla, while – in 2009 – he released My Christmas, a collection of Christmas melodies.