Home > Architecture > Carrara marble: an excellence known all over the world
0
0
Search
Share the article:

One of the most appreciated materials in the world

One of the most popular materials in our country and also one of the most used by the greatest sculptors in history is Carrara marble. There are numerous buildings all over the world that are finished off with this particular material. Italian Traditions leads you to its discovery by telling you its story and what it is. We also explain what its main features are. Finally you can discover all the destinations where it is sent.

It is a metamorphic rock that originates from the crystals of calcium carbonate. Its origin derives from pre-existing rocks that due to strong pressure variations have undergone a reorganization of their crystalline structure that has transformed them into a different type of rock. In the case of that of Carrara it originated from a calcareous rock similar to that which today form the coral reefs of the tropical seas. An important thing to say is that it is a very valuable type that is extracted in the quarries of the Apuan Alps in Tuscany.

According to historical sources, the quarries of the Carrara area were already used during the Iron Age by the Ligurian populations of Ameglia. The actual extraction activity however began in Roman times and reached its maximum development under Julius Caesar. This marble was used to supply the workers who were responsible for the construction of the main public buildings of the city of Rome. Later, due to the barbarian invasions of the fifth century, the extraction stopped suddenly

With the advent of Christianity, the demand for marble became ever greater. This was due to the fact that it was used for the construction of religious buildings. In the following centuries it was used by the principal sculptors particularly in the Renaissance period. In the 20th century during the Fascist domination, Carrara marble was widely used. 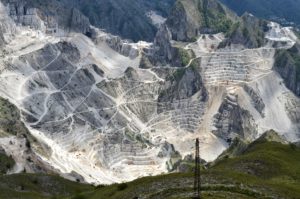 The quarries are divided into four different basins that have particular geological and productive characteristics. The qualities are:

The first represents about half of the entire production of the area. Generally it has a pearl white color and light gray veins. The second one has a type of color that can be defined as off-white and has some grain with a definite pattern. The third is certainly the most valuable quality and is usually used for the creation of sculptures.

The material has characteristics that make it unique. One of the main reasons is the fact that it is extremely flexible and for this reason it has been used in sculpture, crafts, design and architecture. Another fundamental characteristic consists in the extraction method. This is also a guarantee of quality for those who buy it. The blocks must have the shape of a parallelepiped from which the various slabs are then cut.

Our nation is known all over the world for the wealth of its territory’s resources. Some materials are processed from ancient times. Even today, the quality and unique characteristics of Carrara marble make it a prestigious and widespread material.